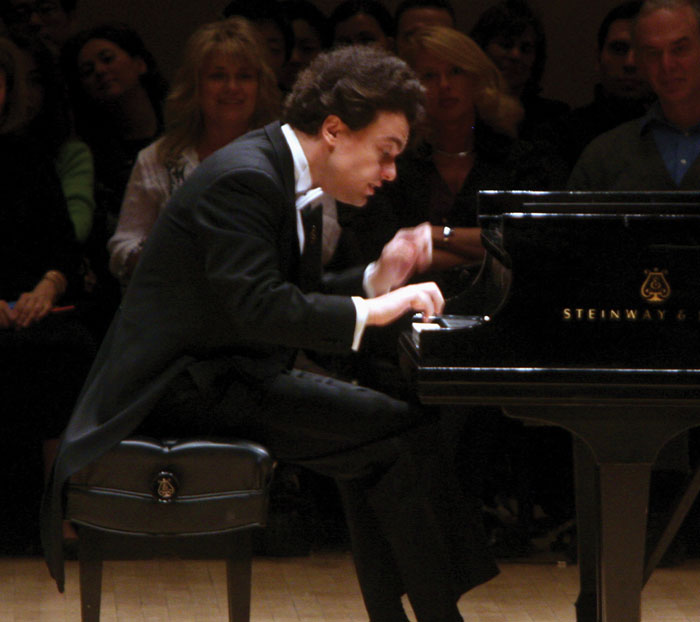 In 1988 Kissin made his London debut with the LSO and Valery Gergiev and also appeared for the first time with Karajan and the Berlin Philharmonic. In 1997 he was the first pianist to give a solo recital at the BBC Proms and gave seven encores.

A prodigy of prodigies, Evgeny Kissin first came to fame in March 1984 at the age of 12 when he performed Chopin’s Piano Concertos Nos 1 and 2 in the Great Hall of the Moscow Conservatory with the Moscow State Philharmonic under Dmitri Kitaenko. His performances, recorded live – live in every sense – were released to wonder and astonishment. Having already made his debut, aged 10, in the Mozart D minor Concerto, Kissin already sounded like a seasoned pianist and his subsequent intensive career took the music world by storm.

But if Godowsky’s famous quip ‘a wunderkind is one in whom the wonder vanishes and the child remains’ could hardly apply to Kissin, his awe-inspiring concerts and recordings have sometimes suggested a contradiction, even a coarsening of his talent. Comments about ‘glaring daring’ and a longing for ‘enchantment’ rather than ‘war and conquest’ became increasingly frequent, and it is significant that appearances and recordings have decreased in recent years. This despite Kissin’s declaration (and as I found to my cost he is notoriously reticent in interview) that love is his only criterion when deciding what to play and how to play it. But the memory of hyper-sensitivity in a group of Chopin Mazurkas and more than athletic prowess in, say, Brahms’s Paganini Variations and Liszt’s Transcendental Etudes haunts the imagination.