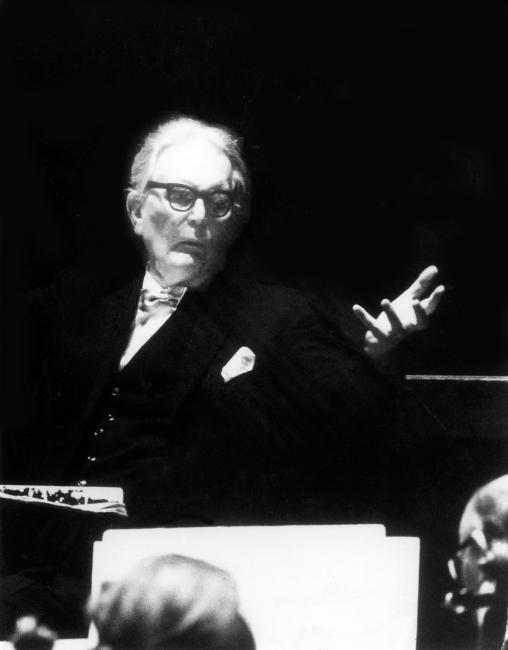 Despite a hugely successful early career, Klemperer’s reputation lies on the remarkable Indian Summer during the 1950s and 1960s when he recorded with the Philharmonia Orchestra for EMI whose principal conductor he was from 1959 until his death.

As a young man he worked with Mahler: he conducted the off-stage brass in a performance of Mahler's Second Symphony and assisted at the premiere of the Eighth Symphony. He worked at a number of European opera houses: Hamburg, Bremen, Strasbourg, Cologne and Wiesbaden, before headed the Kroll Opera in Berlin where he gained a reputation for champion new works. Forced out of Germany by the Nazis, he became music director of the Los Angeles Philharmonic in 1939 but illness robbed him of the top job, though he continued to appear as a guest conductor. After the war he joined the Budapest Opera but left when the Communist regime was established. He undertook a lot of guest work before being invited by Walter Legge to work with the newly established Philharmonia Orchestra.

Klemperer: a tribute by Peter Quantrill

'"To create is to put in order. Put what in order? Function and objects." Le Corbusier was speaking of buildings, but Otto Klemperer was an architect of music. Another doyen of Bauhaus design, Mies van der Rohe talked of "skin and bones" architecture. Listen to Klemperer’s recording of Beethoven’s Fourth Symphony and you hear, no, you sense the organism of the composer’s invention, in all its parts. That he also knew his Bach inside out and grasped the new structures of Boulez and Stockhausen is crucial to such understanding. He was a complete musician worthy of any accolade posterity cares to award.'