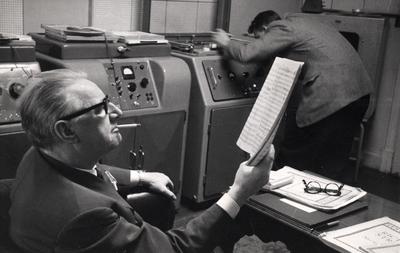 Legge, the husband of soprano Elisabeth Schwarzkopf, was a hugely important figure in British musical life. He joined HMV in 1927 and was soon working as what today would be called a producer. He founded the Philharmonia Orchestra in 1945 and soon it was attracting some of the great musicians of the day from Arturo Toscanini to Herbert von Karajan, Wilhelm Furtwängler and Otto Klemperer. Many of the recordings he produced became immediate classics and still stand the test of time 60 years on: not least of which are the Maria Callas opera sets, the Dennis Brain Mozart horn concertos and many of the Lieder discs sung by Dietrich Fischer-Dieskau.

Legge: a tribute by Andrew Keener

'A few years ago, EMI issued ‘The Art of Walter Legge’. Musicians under 30 who are not keen record collectors may have assumed that here perhaps was a veteran conductor, instrumentalist or singer. It may be news to them that Legge was one of the first ‘interventionist’ recording producers, imposing musical guidance, even an interpretative viewpoint (sometimes resisted!) in the studio. Legge believed in recording as an art form in itself, intending music-making that would bear repetition, interpretations that represented, without distraction or compromise, what an artist had to say about a piece of music. He and his contemporary colleagues paved the way for the next two generations of producers, including myself. Like him, we are vicarious musicians, in love with music, and endlessly fascinated by the musicianship and company of performers.'