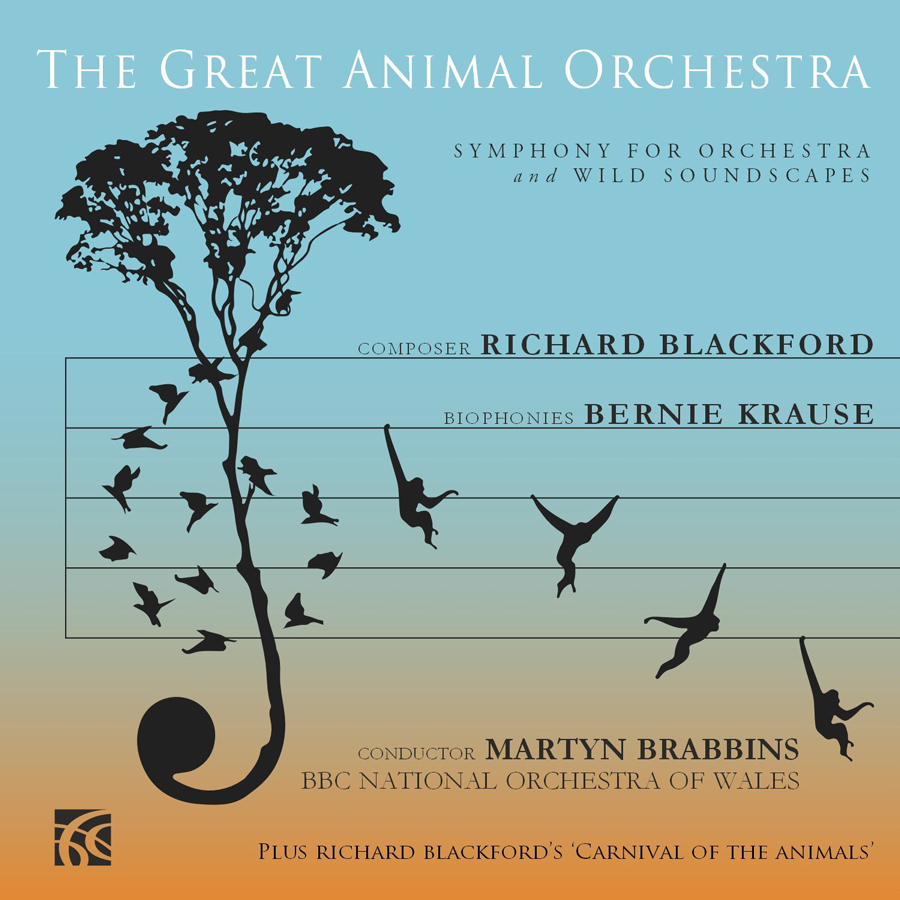 I feel confident that few, if any, composers other than Richard Blackford ever included the phrase 'we begin with gibbons' in an explanation of their latest major work, unless of course they were referring to Orlando of that ilk, but Blackford is no ordinary composer; and sitting in on the first recording of his remarkable Great Animal Orchestra Symphony was certainly a unique experience. The first thing to strike me was the remarkable sonority both of the BBC National Orchestra of Wales (conducted on this occasion by Martyn Brabbins) and also of their home, the Hoddinott Hall, which I had never before visited. This orchestra, not least thanks to its television work (notably but by no means exclusively for Doctor Who) has become a leading element in the recent renaissance of Wales, which has given such pleasure to those of us who love all things Welsh. This impressive sound world was entirely appropriate, indeed essential, for Richard Blackford's masterful orchestration invariably focuses on creating unusual and striking sonorities - and never more so than in this extraordinary, half-hour piece. It has evidently also helped that the orchestra, just two days earlier, had given the (extremely well received) world premiere of the piece, at the closing concert of the 2014 Cheltenham Festival. 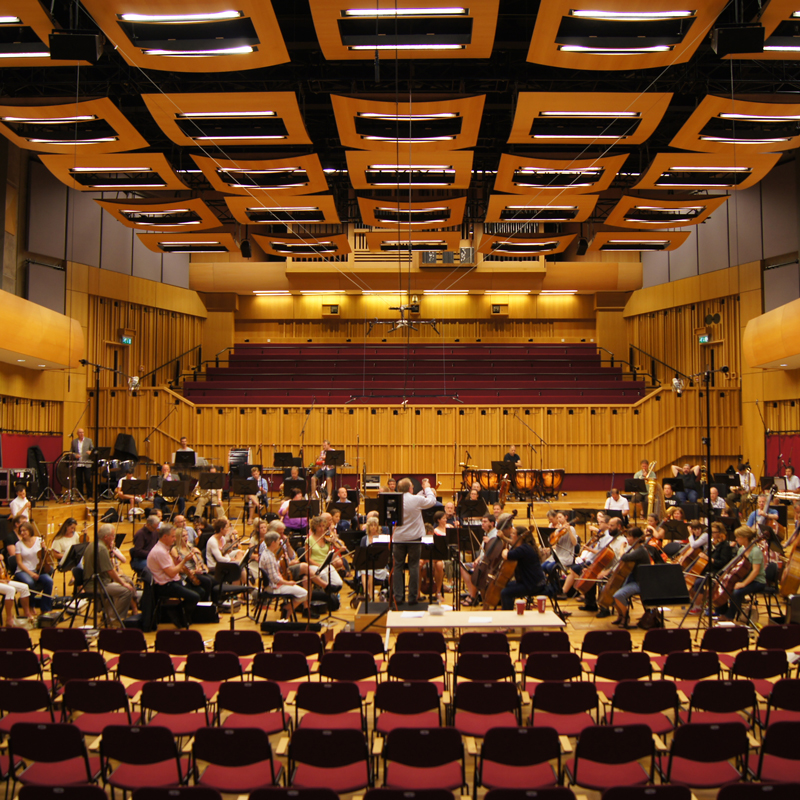 I have never heard anything quite like this symphony, but, then, there has never been anything quite like this symphony. Sitting amidst a traditional, 70-piece symphony orchestra is a lady with a keyboard. You may well think there is nothing unusual in this, but from this keyboard come not the sounds of a piano, a celesta or even anything a devotee of John Cage or Conlon Nancarrow might recognise. This electronic keyboard is designed to replicate the sounds of nature – their timbres, their pitches and also their melodies, some of which take the breath away with their beauty. Along with several bona fide recordings of natural sounds, this sampling device intermingles with the sounds of the orchestra, sometimes leading, sometimes following, always adding something very special to the texture. Even more extraordinary than the concept itself is the degree to which this blending of nature and humans works; and, simply by working, it makes it point. At its best, music always speaks more eloquently than words can. This music speaks with great eloquence, authority and immediacy, but not only on behalf of human beings: it speaks also for the natural world, casting light upon humanity’s often less than felicitous relationship with our fellow creatures. Of course, Olivier Messiaen famously transcribed birdsong and used it in his music, but this piece works on a very different canvas – certainly more accessible and arguably more ambitious too. 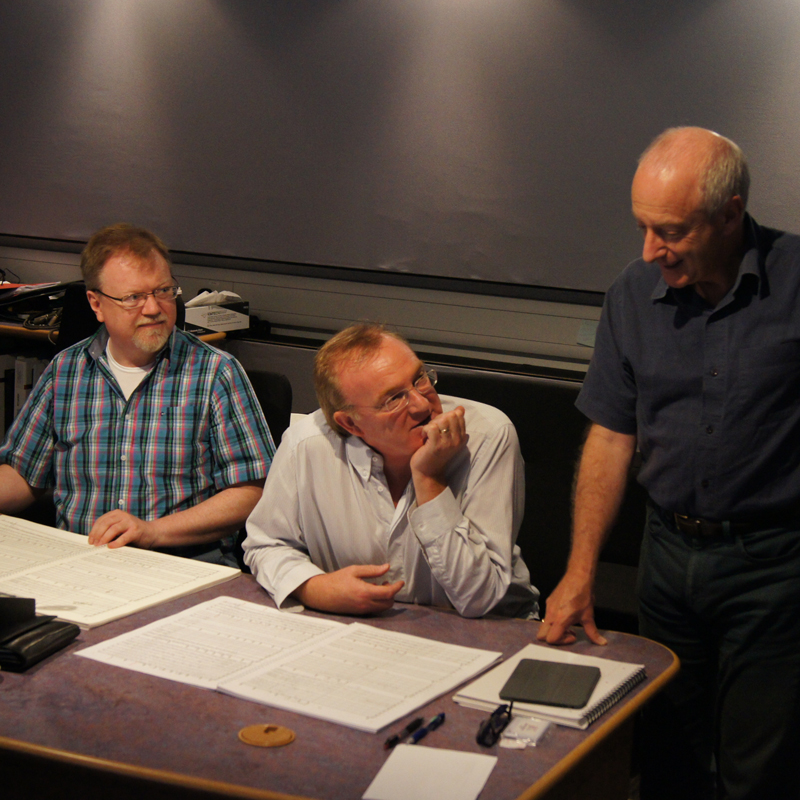 The inspiration came from a book entitled The Great Animal Orchestra by Bernie Krause, himself no mean musician (he replaced Pete Seeger in the Weavers), who is universally acknowledged as the world's leading expert in natural sound and the recording of natural soundscapes, which he has spent 45 years doing. It is hard - no, impossible - easily to summarise Krause's work or philosophy, but this dazzling musical development of it by Richard Blackford provides a vivid demonstration of the point he makes very convincingly in his book: that what we think of as human music and the sounds of nature are inextricably intertwined. For Krause, the natural world, especially if left in peace without intrusion from planes, trains and automobiles, could be represented on a musical score, just as surely as human music has been. Only the natural version is far more complex: ‘Insects occupy one niche...Birds occupy another...If their lives depend on it, they'd better find a channel in which they can transmit and receive information, so they have some prospect of surviving'. Richard Blackford cannot praise his collaborator and inspiration enough: ‘Not only has Bernie recorded over 15,000 species in 5000 hours of recording...His background is as a distinguished musician...He is highly informed about musical processes and structures and also produced a spectrograph analysis from bats to insects, to mammals, through all the species: a gift to a composer!’

Many of the soundscapes captured by Krause are already lost, presumably forever, but the Blackford piece carefully eschews any overt political messages. The sub-text is hard to miss, however, not least when Blackford himself describes the third of the symphony’s five movements as an ‘elegy for animals which have been either destroyed or displaced by mankind’. It begins with a recording of a pack of wolves howling. They are accompanied by a quartet of French horns playing in clusters and, even listening carefully, sometimes it’s impossible to discern the difference between horn and wolf. This leads into a threnody based upon the heart-breaking wail of a (presumably mortally injured) beaver whose habitat has been blown up with dynamite. The sound is remarkably akin to that of a wooden flute: a spontaneous cry of pain from an animal, yet somehow vividly redolent of human artifice. The fourth movement is ‘about power’ and explores species from Africa, most notably the African elephant, which Blackford describes as being ‘capable of immense power...but by and large they are gentle’. Bernie Krause seems wryly amused when I remind him that this particular symbol of ‘soft power’ is also the traditional logo of the US Republican Party. There is no danger of the piece collapsing under the weight of earnestness or pessimism, though: Blackford is quick to praise the good work of conservationists and their supporters; and there is also a great deal of fun, notably in the faster movements.

The Great Animal Orchestra Symphony is dedicated to its inaugural conductor Martyn Brabbins, who has embraced its eccentricity, its virtuosity and also its life-enhancing admixture of serious musical substance with exuberant rhythmical and melodic material. He comments: ‘When I saw the score, it wasn't clear how it was going to work, but I think what soon became apparent was that Richard, having worked in film and television aside as he has, is aware of what a keyboard sampler can do. The work he had done in preparation meant that the keyboard player simply played the part like a piano part – it’s all notated in rhythm and pitches. Occasionally she has to play things rhythmically with me and occasionally I have to conduct with the fixed pulse of the frogs or the crickets. So really it was like accompaniment and it was great fun. We've had the best of times really and we've discovered a new sound world’.

In the finale, an Amazonian musician wren’s 44-note song is accurately reproduced by a keyboard and then provides the thematic basis of a dazzling and haunting fantasia, leading into the coda. This seems to me the most striking (and also, despite the joys of the scherzo, probably the most catchy) movement. I learn that, in Krause’s original recording, the wren sings this entire note sequence twice, then a parrot starts squawking indignantly, as if to tell the wren to give it a rest. The wren apparently hesitates, then starts again, repeating the same 44 notes. For Richard Blackford, ‘that felt so much like what happens with a concerto, the interplay between a soloist and the orchestra, particularly a playful one such as in the last movement of Beethoven’s Fourth. I made it not a parrot but a common patoo, which also comes from the Amazon and sings a perfect pentatonic scale. Bernie told me the Peruvians take that scale and make their ocarinas based on it’.

Elsewhere in the piece there are aleatoric elements, allowing the musicians in the orchestra to give a sense of the chaos of nature; and a great deal of syncopation too, with overt jazz influences, rapidly shifting time signatures and, always, Richard Blackford's distinctive, bubbling energy. No composer likes to be told his music sounds like someone else’s, but I have spent a lifetime embracing the works of Leonard Bernstein and this piece (in particular its second movement scherzo, which is ‘all about play’) does at times possess wonderful echoes of the distinctive, sheer exuberance and energy that is so much associated with Lenny and his idiom. The wolf cries that open the third movement even remind me of the sirens that are a connate part of the soundscape in the movie of West Side Story. Richard Blackford also shares Bernstein’s commitment to education and his ambition is to see schools embracing the Great Animal Orchestra Symphony. In the first week of August, he will himself conduct the London Schools Symphony Orchestra in the work, in both Aberystwyth and Birmingham.

There is always a danger that such a piece can be perceived as a gimmick, but, to my ears, the interplay between traditional orchestral instruments, Bernie Krause’s tapes and the keyboard sampling is almost unbelievably naturalistic. As Richard Blackford puts it, ‘with this technology it is literally possible for animals to dance and sing with a symphony orchestra’. Perhaps there is indeed as much artifice in the sounds of the wild as there is in the works of man. If Bernie Krause is correct in his assertion that animals taught us to dance and sing, then possibly this beautiful, exciting, engaging work, with its passionate homage to nature and the natural world, might just make us deepen our love and respect for our feathered and furry mentors, some of whom at least continue to share this world with us.

For the next few weeks, a live recording of the premiere performance in Cheltenham can be heard on the BBC iPlayer here.

You can pre-order the recording of the Great Animal Orchestra Symphony at Amazon now, released by Nimbus Alliance.

For more information about the project visit the Great Animal Orchestra website.