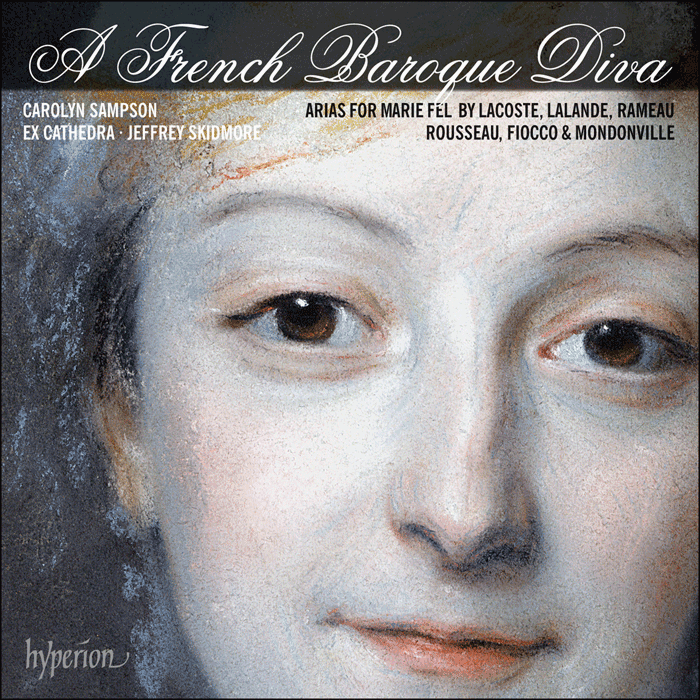 This is a brilliantly planned and executed, musically illustrated biography of Marie Fel, one of the great 18th-century divas and muse of Rameau, admired by the Philosophes and adored by Paris audiences. So don’t be put off by the apparently recherché repertoire: this is a programme that pleases as much today as it did in hers, guided by Graham Sadler’s beautifully crafted booklet-notes.

Fel made her Opéra debut in a 1734 revival of Louis Lacoste’s Philomèle, singing the role of Venus. Carolyn Sampson, in superb form, is joined here by the choir of Ex Cathedra, who sing with precision and clarity of articulation in a lovely bright acoustic. As well as at the opera house, Fel also performed at the public concerts held in the Tuileries, where she was a soloist in Latin choral and orchestral music by Lalande, Mondonville, Rousseau and the Italian Fiocco, as well as in private performances of the theatre works by Mondonville and Rameau at Fontainebleau and Versailles included (mainly excerpts) on this disc.

The orchestra of Ex Cathedra, led by Margaret Faultless, provide stirring and sympathetic accompaniments for this varied succession of virtuoso vocal vehicles. Flautist Rachel Brown performs the exquisite solo and concertante lines in Mondonville’s Venite, adoremus and illuminates the sound of the lyre with her piccolo in Rameau’s divertissement from Les surprises de l’Amour. There is also sensitive concertante playing by the bassoonists in ‘Tristes apprêts’ and, with the addition of the oboist Gail Hennessy, in the movement from Lalande’s Cantate Domino.

Best of all, the longer we listen to Sampson’s voice, the more she seems to inhabit the aura of Fel, clearly a skilled and charismatic yet deeply affecting performer. Fel’s artistic flexibility is further demonstrated by the inclusion of the Fiocco (here performed with ornamentation Fel wrote into her part), Mondonville’s frothy pastorale – obliging Sampson to sing in Fel’s native Occitan – and Rousseau’s bang-up-to-date Salve regina, which obliges the soloist to blend her voice with the horns. Sampson’s performance is the more admirable for evoking the spirit of another singer.

Start to finish, Jeffrey Skidmore devotedly shapes and paces the programme to achieve a fittingly vivid portrait of Mlle Fel.