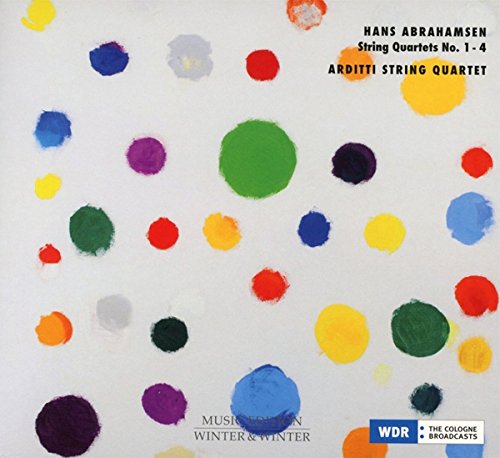 This backwards-looking survey of Hans Abrahamsen’s four string quartets, starting with the most recent from 2012 and finishing with the 10 Preludes of 1973, fills a major gap in this elusive composer’s discography. The quartet is one of the few genres Abrahamsen has cultivated more than once, with the First recast for alternative instrumentations: string orchestra and, just last year, cello quartet.

Abrahamsen’s trademark pared-down textures and glacial-moving developments are immediately apparent in the opening ‘Light and airy’ movement of the Fourth Quartet, a static essay in pure harmonics. Each movement injects additional ingredients, tied together exhilaratingly in the ‘Gently rocking’ finale. Nominally in four movements, the brief Third (2008) – all 11 and a half minutes of it – is really a diptych with two brief introductions. The more substantial Second (1981), arguably his first for the medium proper, is an example of the strain of expressionism that runs as an undercurrent through his oeuvre.

The Arditti Quartet’s performances are clinical and virtuoso, revelling in the music’s exploratory qualities. It is instructive – and fascinating – to compare their version of No 1 with last year’s Gramophone Award-nominated recording from the Danish Quartet (coupled with early quartets by Nørgård and Adès). The Danish found more of the music behind the technical challenges (rendered immaculately) in an interpretation that is more satisfying expressively and warmer in tone. Both performances last for around 21 minutes but how they traverse that time is in places very different, especially in Prelude No 5, which under the Arditti’s bows is half as long again as from the Danish Quartet. That said, there is much to admire in the Arditti’s cooler playing; their all-Abrahamsen programme is more attractive and, at 69' as opposed to ECM’s paltry 47', rather better value for money. Fine sound.