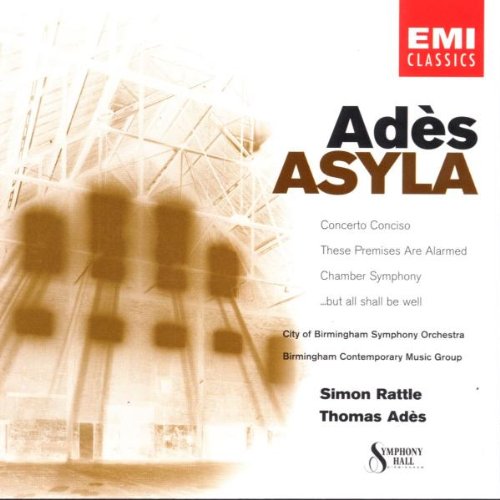 In not much more than 18 months, EMI has now recorded 19 works by Thomas Ades, including his full-length opera, Powder Her Face (9/98). The welcomings of a new and outstanding talent have generally been warmly enthusiastic, but there seems also to have been an adverse reaction: of course and understandably from those who see other gifted young (and not so young) composers receiving far less attention and publicity, but there have also been a few cries of ‘But surely he isn’t as good as all that?’ and ‘Why all this fuss about a merely fluent talent?’. My reply to the former would be a simple riposte of ‘Yes he is’; to the latter, if I had the space and you had the patience, several pages more in sorrow than in anger (well, a bit more) about how far British music has progressed since it dismissed Benjamin Britten as too clever by half.
Now then. This latest CD, though not the first I would recommend to anyone who wants cast iron proof of Ades’s significance, is uncommonly interesting. It includes the Chamber Symphony, the work that first aroused interest in him all of ten years ago when he was 18, set alongside Asyla, a recent un-chamber symphony and his first work for full orchestra. The progression between them is remarkable: the Chamber Symphony is, if you like, both clever and fluent, but it has both real invention and real economy, and its use of jazz elements is neither patronizing nor culinary. Maybe its last movement adds little of consequence to the preceding three, but Asyla genuinely grows from the grave, rather Britten-ish horn line that sets it going through the strong drama of the central movements to the almost Sibelian climax of the finale. Despite the two composers I have mentioned Ades’s own voice is clearly audible throughout, elegant, coolly intelligent but urgent.
These Premises are Alarmed, a sinewy toccata of bright colour and urgent energy, was written for the opening of the Bridgewater Hall in Manchester. At four minutes it makes less impact than it should in the middle of a CD (play it first). In the Concerto conciso Ades perhaps takes his pleasure in simple intervals and brief motives a little too far: the finale seems skinny, and I’m not too sure about the central movement. However,

...but all shall be well

These Premises are Alarmed