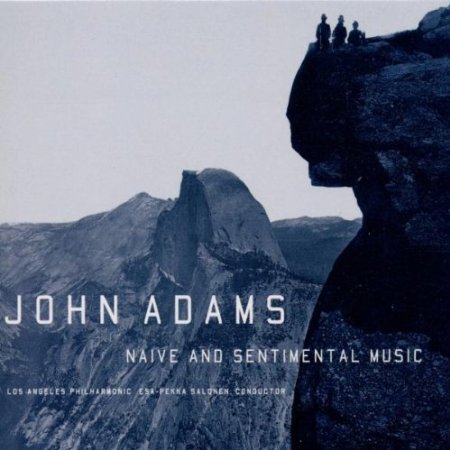 The title of this work is adapted from On Naïve and Sentimental Poetry‚ a 1795 essay by Schiller who regarded the naïve artist as one for whom art is a natural form of expression‚ and who creates without concern for historical significance; the sentimental artist is all too aware that he and his art stand apart‚ and what he creates reflects this chasm. ‘This particular piece‚’ Adams writes‚ ‘perhaps more than any of my others‚ attempts to allow the naïve in me to speak‚ to let it play freely.’ A symphony in all but name‚ Naïve and Sentimental Music (1999) is cast in three movements. The first is an ‘essay on melody‚’ built around an expansive theme that unfolds in long strands. The tune stretches on and on‚ yet avoids aimlessness by latching regularly onto a few tiny and easily recognisable motifs. Adams’ harmonic sensitivity and structural control are breathtaking. Note‚ for example‚ how after the first big climax (beginning around 7'30")‚ each brief yet distinct developmental section emerges so naturally from its predecessor. Indeed‚ the entire movement unfolds as organically as does the melody that is its idée fixe. The second movement‚ subtitled ‘Mother of Man’‚ is a gloss on Busoni’s Berceuse élégiaque. Radiant‚ desolate and mournful‚ it immediately brought Whitman’s ‘Out of the cradle endlessly rocking’ to mind: ‘…Over the sterile sands and the fields beyond‚ where the child / leaving his bed wander’d alone‚ bareheaded‚ barefoot.’ Ascending scales towards the end (starting around 9'57") suggest a transformation of some sort – perhaps even a spiritual transfiguration – though the coda‚ with its sonorous‚ unsettled harmonies‚ prevents any feeling of closure. Adams titled the finale ‘Chain to the Rhythm’. Melody takes a back seat to what quickly becomes a dazzling and increasingly ominous moto perpetuo. And‚ as in the first movement‚ I was struck by the composer’s ability to create a constantly changing and seemingly inevitable musical trajectory. Naïve and Sentimental Music is dedicated to Esa­Pekka Salonen and the Los Angeles Philharmonic‚ who premièred it in February 1999. This recording was made some eight months later. There are some tentative notes when the violins reach into the top of their register in the first movement‚ and I can imagine the fiendishly difficult finale played even more tautly than it is here‚ but the overall interpretation is very persuasive indeed. There is no coupling‚ which leaves the disc with a rather short playing time. I feel sure‚ however‚ that most will feel that Adams’ work has given them more than their money’s worth.