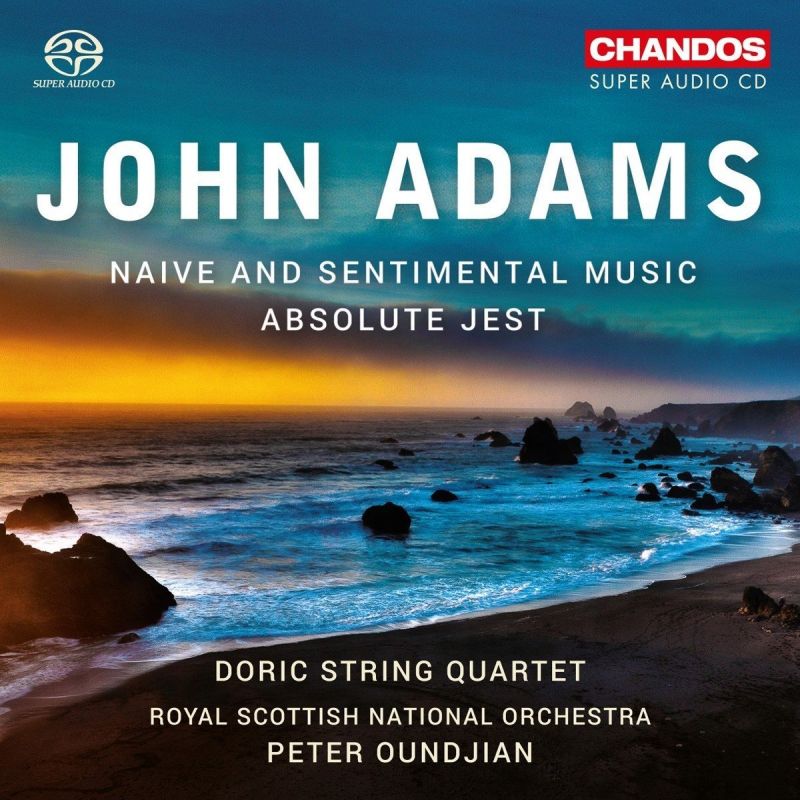 One need only recall the impressive 2013 recording of the Doctor Atomic Symphony and the mighty Harmonielehre to realise that the Royal Scottish National Orchestra and Peter Oundjian are far from strangers to the music of John Adams. Their latest release is of two other large Adams works: Absolute Jest (2011, rev 2012), written for the San Francisco Symphony Orchestra’s centenary, and Naive and Sentimental Music (1997 98), dedicated to Esa-Pekka Salonen and premiered by him with the Los Angeles Philharmonic. This splendidly engineered Chandos disc is the second recording of both works.

Absolute Jest is not really a concerto for string quartet and orchestra in the grain of Spohr, Elgar or Schoenberg, despite the fearsome demands made on the featured quartet. I like Adams’s own description: ‘a colossal 25-minute scherzo in which I take fragments of Beethoven’s music and subject them to my own peculiar developmental techniques.’ It’s a staggeringly challenging work for the ensemble, and both the RSNO and the Doric Quartet, led by Oundjian, he of the fine, discriminating ears, acquit themselves magnificently. Savour, for instance, the Quartet’s affecting meno mosso fourth movement. One might quibble that the RSNO brass lack the heft of San Francisco’s but the Scottish percussionists need take a back seat to no one. If the overall performance is without some of the manic, driven energy of San Francisco, all the better for clarity of detail and contour. It may not be manic but it’s plenty exciting.

There’s a happy inspiration in the pairing of these works, Absolute Jest fashioned out of fragments of Beethoven and the almost twice as long Naive and Sentimental Music alluding to Schiller. Despite the fact that both are the products of the same master orchestrator, the two works could not be more different in tone or intent. Following the explosive polyrhythmic angularity of the vast first movement, the second, ‘Mother of the Man’, creates a lonely calm that verges on existential emptiness. A word of warning: in these desolate stretches, Sean Shibe may steal your heart with his guitar solo. The finale’s title, ‘Chain to the Rhythm’, speaks for itself; perhaps only a composer who is also a virtuoso wind player could conceive such textures.

How wonderful to have these penetrating second interpretations of two exquisite works, captured in the most sensually luxurious sound. I’d be hard-pressed to name another recent release which affords greater aural pleasure or more significant nourishment, beginning to end.