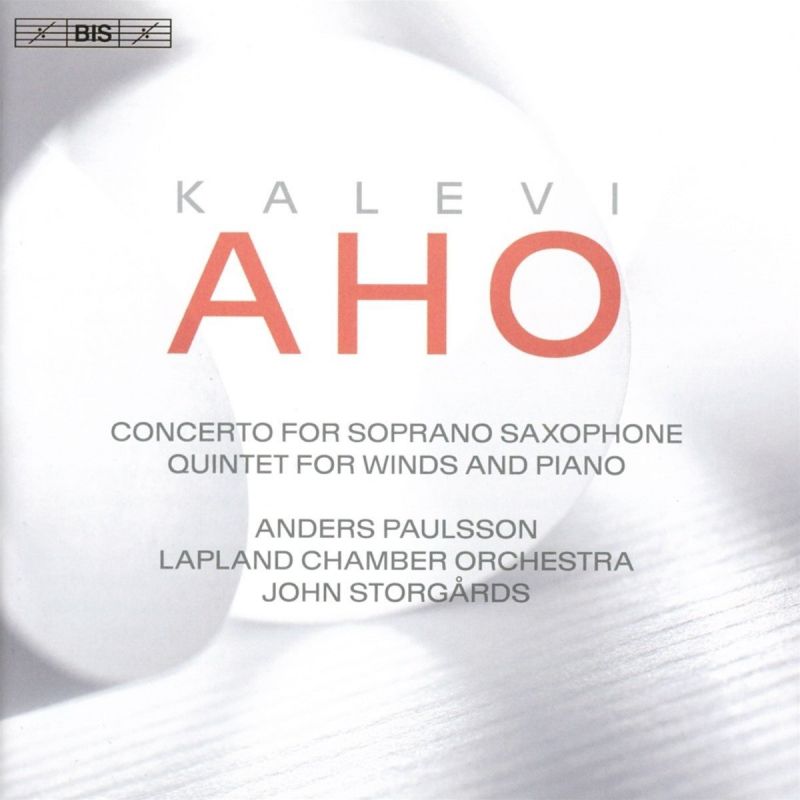 BIS’s long-term commitment to the music of Kalevi Aho (impressive even by the standards of this label) continues with a disc that focuses on recent concertante and chamber works. The Concerto for soprano saxophone (2015) is among the most recent of Aho’s substantial contribution to this genre, taken to a new level of refinement. Its three movements suggest a Classical format, though the first accelerates from an atmospheric ‘Invocatio’ into a Presto whose propulsion carries over into an intricate Cadenza; after which the central Misterioso unfolds an elegant melodic line over pensive harmonies, while the finale regains something of the earlier rhythmic energy on its way to a ‘Quasi epilogo’ that brings the work understatedly full-circle.

The Quintet for piano and wind instruments (2013) is formally a more orthodox conception, though not without elements of surprise or suspense. Here, the discursiveness of its opening movement is countered by an impetuous ‘Toccata’, then a sombrely expressive ‘Nocturno’ provides respite before the final ‘Burlesco’ accelerates to its exhilarating close.

Both Anders Paulsson and Väinö Jalkanen evince admirable musicianship, as does Jaakko Kuusisto in Solo I (1975), the first in what has become a sequence of 12 (to date) pieces which provide a latter-day counterpart to Berio’s Sequenza series. The cadenza of Shostakovich’s First Violin Concerto seems the likely precedent in its pursual of a trajectory from relative stasis to outright dynamism, though with audible modal inflections along with that pivoting between tradition and innovation which has informed Aho’s music throughout his maturity.