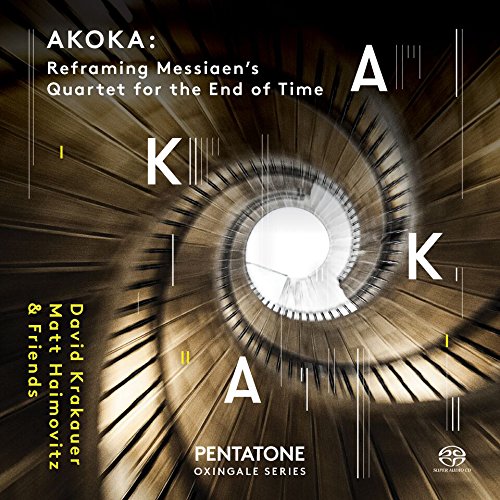 If the title and indeed often unearthly content of Messiaen’s best-known chamber work can lead us to listen to it in refined but also abstracted terms, this ‘reframing’ places the Quartet for the End of Time in the context of its disputed origins, in wartime France and Poland. You can read all about them in Rebecca Rischin’s history For the End of Time (Cornell: 2003, usefully paraphrased in her booklet-notes) but this isn’t just the CD of the book.

The album title honours one of the quartet’s original performers in Stalag VIII A, the clarinettist Henri Akoka. Through the violinist Étienne Pasquier, Messiaen met Akoka in Verdun, and began composing what became the third-movement ‘Abîme des oiseaux’ before they were captured and deported together. David Krakauer has composed a wild, keening improvisation, klezmer on crack, crunching Akoka’s Algerian-Jewish heritage with fragments of the Quartet to come.

Bearing in mind this background – Rischin’s research into Akoka’s particular, metallic tone-quality, for example – the Quartet itself is played and heard afresh. There’s no mistaking the Jewish inflection of Krakauer’s solo, but a rhythmic freedom more subtly inflects the opening ‘Liturgie du cristal’ and the two ‘Louange’ movements. The effect is often less monumental, more spontaneous than usual, though the unison sixth movement is as rhythmically tight and implacable as one could wish.

The recording itself, too, is very thoughtfully done: the piano is not placed a few feet back as is common, and Geoffrey Burleson’s sensitivity to his colleagues is all the more impressive for being exposed to close scrutiny, though his rhythmic shading in the final ‘Louange’ rather comes and goes. Of the sampled electroacoustic epilogue, the less said the better. The Messiaen performance puts a human face on a disparate body. I hear the piece a little differently now, and love it a little more, and what more can a recording do?