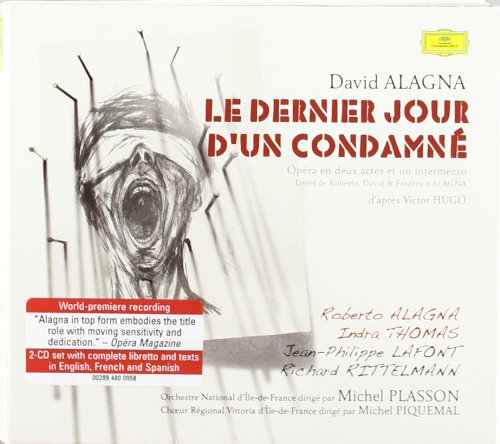 How many Alagnas does it take to make the Victor Hugo-inspired opera Le dernier jour d’un condamné? Three: Roberto to sing it (and he does so brilliantly), David to compose the deadly earnest music and Frederico to create the scribbly illustrations in the confusing DG package. All three take credit for the libretto. Given the recording date (2007), shouldn’t Angela Gheorghiu have been there too?

There’s a place for her. Hugo’s early-period (1849) 49-chapter book about social injustice requires plenty of librettist liberties. Thus the central character of the condemned prisoner, updated to the year 2000, has a female counterpart. Without it, the piece would be close to a monodrama – a lot for any tenor to carry, given the weighty, mid-20th-century tonal language that David Alagna uses in no uncertain terms. The composer employs outside help from Boris Godunov, both the choral writing and the Clock scene, which enhances the narrative ordered by the countdown to the prisoner’s execution. Kaija Saariaho’s Act 3 prelude to L’amour de loin is also felt, giving the music a sense of unstoppable inevitability.

Lamentably absent is the more nuanced argument about capital punishment that’s handled so easily by Dead Man Walking, which also gives a wider sense of the world that creates the people it condemns. But for all the compelling moments – the composer employs a dramatically healthy variety of textures and makes effective use of sequential repetition – the piece’s place isn’t in the opera house, because exterior action is so limited, mainly to exchanges with bailiffs and onlookers. With such message-heavy narrative, it’s best heard in special-occasion concerts for humanitarian and relief organisations.

As one might expect, the vocal writing fits Roberto Alagna perfectly, and seems also fashioned for the kind of volatility and pathos that have given durability to his sometimes haphazard career. Gheorghiu isn’t missed. Indra Thomas has everything – vocal plushness, good projection of the French language and the kind of dramatic sense needed to sell the piece. The other two singers fill a number of secondary roles – a bit like those Orson Welles films where the great director dubbed the voices of numerous minor characters himself.