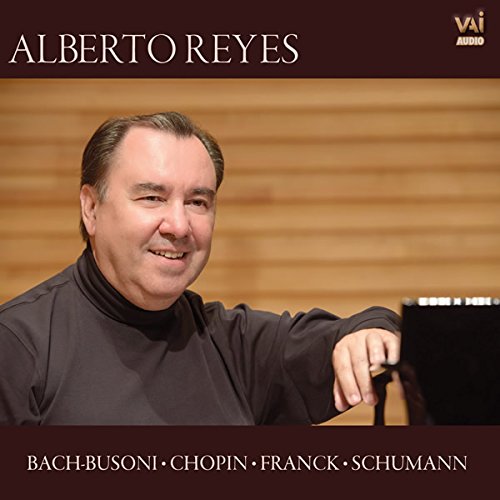 I first encountered the cultivated and masterful pianism of Alberto Reyes on a hard-to-find 1995 Connoisseur Society release devoted to Liszt’s Verdi Paraphrases, and later had the pleasure of reviewing his all-Schumann double CD set in these pages (6/11). His newest release may be his best yet. Unlike certain pianists who view the Bach-Busoni Chaconne as a virtuoso display piece in and of itself, Reyes’s patiently expansive rendition adds up to a masterclass in how to build assiduous climaxes, how to intelligently scale one’s dynamics and how to balance the massive textures in sonorously judicious proportions.

By contrast, the Franck Prelude is uncommonly animated and translucent in Reyes’s fluent hands, followed by a Chorale anchored by firmly projected bass lines and a sweeping Fugue that benefits from his favouring line over mass. If Reyes’s Chopin Polonaise-fantaisie lacks the cutting edge and galvanic brilliance of Horowitz’s classic live 1966 Carnegie Hall recording, his intimately drawn, gently swaggering way with the main theme that follows the introduction keeps the polonaise rhythm in focus. There’s more backbone than usual to the moody central section, while, conversely, Reyes resists pressing ahead in the final peroration: an unconventional yet convincing interpretation.

While Reyes is not about to outsprint Martha Argerich or Marc-André Hamelin in the Schumann G minor Sonata’s swifter movements, his thoughtful musicality easily elevates him across the finish line. He uncovers important inner lines and pointed accents within the first movement’s broken chords and distinctly characterises the Rondo’s thematic contrasts, cannily sidestepping the music’s potential for textural clutter. I especially warm to Reyes’s eloquent Andantino, where the right-hand melodies and left-hand arabesques interweave with heartfelt flexibility. Reyes’s booklet notes are as articulate and thought-provoking as his music-making. In short, this gratifying and well-engineered release is highly recommended.