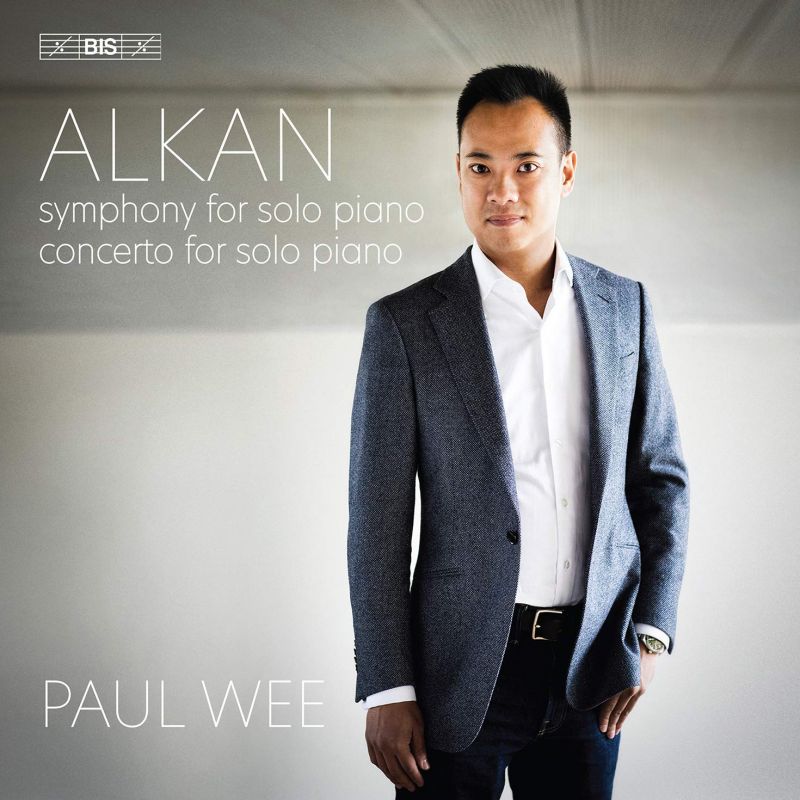 Surprisingly, this is the first time that Alkan’s Symphony for Solo Piano and Concerto for Solo Piano have appeared together on a single disc. The aptly named Symphony comprises four études (Nos 4 7), and its companion Concerto a further three études (Nos 8 10), from Alkan’s set of Douze Études dans tous les tons mineurs, his Op 39, published in 1857. The movements of both works are linked by a progressive tonality, each written in a key a perfect fourth above its predecessor. Those of the Symphony move from C minor to F minor, B flat minor and E flat minor; the Concerto from G sharp minor to C sharp minor and finally to F sharp minor.

Here I must declare an interest: I am one of those who firmly believes that Alkan is a genius on a level with Chopin, Liszt and Berlioz, and that the Symphony and Concerto are two high points in the entire literature of the piano. Many, I know, disagree with that view. Perhaps this recording might persuade the doubters to give them another hearing because, on several levels, it is quite extraordinary.

Alkan’s Op 39 Études are way, way beyond the reach of most pianists, and to the best of my knowledge only five pianists have recorded both the Symphony and the Concerto – Ronald Smith, Jack Gibbons, Stephanie McCallum, Vincenzo Maltempo and Marc-André Hamelin. The performances on this disc equal and sometimes surpass all five. That is astonishing enough; but what is almost incredible is that the soloist Paul Wee is not a professional pianist but a highly successful international commercial London lawyer.

The precision of his attack, the clarity of the part-playing, the linear focus and structural grasp of each movement of the Symphony are quite thrilling to experience – and when Alkan marks the final movement Presto, Wee takes him at his word. The first movement of the Concerto – 72 pages and 1343 bars in length, making it longer than the entire Hammerklavier Sonata – is a roller coaster utilising every conceivable pianistic effect. There are few moments of respite. Wee’s technical command is awesome by any standards but he is no mere note-spinner, adding his own drama and colour to the bravura writing while being equally alive to the moments of lyrical repose. The spontaneity and drive of his playing smash the sterile confines of the studio. It is urgent, committed, compelling. In the finale (marked alla barbaresca), Wee’s brilliant tone and clarion-clear bass lines present a clear contrast to Hamelin’s smoother-toned, more patrician reading that is not, unlike Wee’s, relentlessly aggressive.

But, frankly, this is one of those discs I feel disinclined to niggle over small discrepancies and matters of personal taste. It will certainly be one of my Discs of the Year. It could become a classic. A tip of the hat to producer Jeremy Hayes and sound engineer David Hinitt, as well as to Bryce Morrison and Mike Spring for their seminal roles in the venture – and to Robert von Bahr of BIS for taking a punt. But most of all to the remarkable Paul Wee on his recording debut.