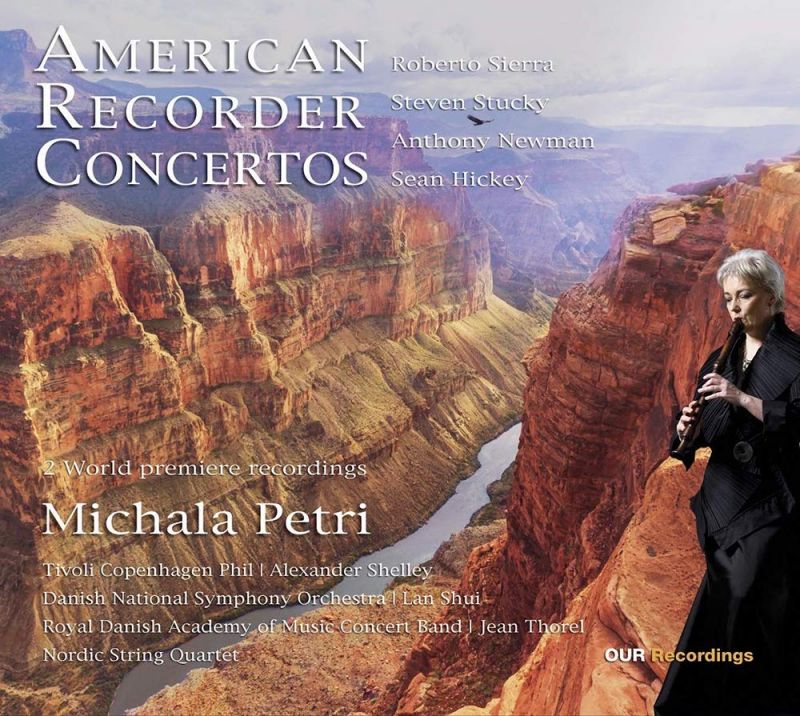 Danish recorder doyenne Michala Petri turns to America for the latest instalment in her international concerto series, and it’s a stylistically varied quartet of recent works. First up is Roberto Sierra’s Prelude, Habanera and Perpetual Motion, a 2018 expansion and development of a 2006 composition for recorder and guitar, for which Petri is ably joined by the Tivoli Copenhagen Philharmonic under Alexander Shelley. The recorder occupies centre stage from the off; and with its ornate melismas circling over a pizzicato-strong accompaniment of ghostly harmonies, it’s the perfect vehicle for Petri’s clean, smooth, precise sound. Likewise the final bongo-accompanied ‘Perpetual Motion’, whose shrilly ducking and diving virtuosities are a reminder if any were needed of Petri’s capacity to get her fingers around absolutely anything, no matter how fast, and make it sound like liquid mercury.

The Danish National Symphony Orchestra and Lan Shui join her for Steven Stucky’s Etudes for recorder and orchestra (2000, written for Petri herself), whose trio of movements – ‘Scales’, ‘Glides’ and ‘Arpeggios’ – explore the orchestra’s palette of colours in a variety of interesting directions, all of which are attacked with artistic gusto by the DNSO. We then switch ensembles once more, as Anthony Newman himself takes the harpsichordist’s part for his 2016 Concerto for recorder, harpsichord and strings: a perkily inventive old-meets-new celebration of the recorder’s Baroque heyday. We wind up with Jean Thorel conducting the Royal Danish Academy of Music Concert Band in Sean Hickey’s A Pacifying Weapon for recorder, winds, brass, percussion and harp: a 2015 work which has the recorder playing the role of an ancient, gentle protester against the menacing, harsher forces of the contemporary world.

This is a multicoloured, multi-textured, multi-ensemble presentation of interesting, little-known repertoire, casting the recorder in all sorts of different stylistic and emotional guises – which makes it all the more surprising that the actual listening experience has ended up being so very samey throughout. Certainly Petri’s phenomenal technique is as polished and en pointe as ever, and her sound as clear and sweet. However, perfection alone does not make a performance, and there’s a lack of emotional fire and conviction from her here, which has had an anaesthetising effect on the whole. As a result, none of it has grabbed me sufficiently to warrant continued listening once the metaphorical ink has dried on this review.

Concerto for Recorder, Harpsichord and Strings