ANDERSON In lieblicher Bläue. Alleluia. The Stations of the Sun 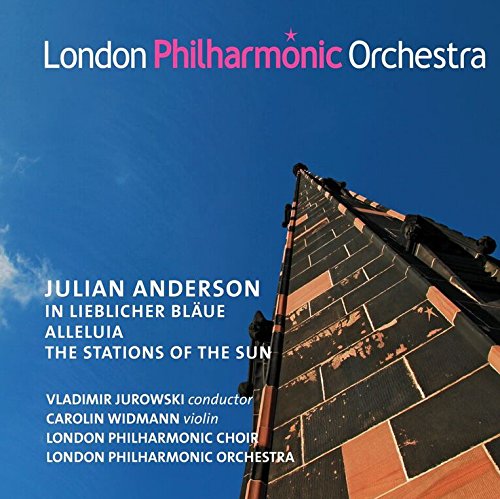 This is the fourth disc to be devoted exclusively to the music of Julian Anderson and the second such venture on the LPO’s own label, reflecting his stint as Composer in Residence with the orchestra, 2010-14. Intriguing as it is, I’m not sure newcomers would be best advised to start with In lieblicher Bläue (2014-15), which contains some spatial and symbolic elements not readily perceptible in audio format. Carolin Widmann’s physical location and posture change throughout. At one point a vaguely Schnittke-like gesture requires the soloist to lay down the bow and play using a pencil. While the composer’s lucid explanatory note survives inept editing, those familiar with Friedrich Hölderlin’s late prose-poem may have a head start in appreciating music at once lyrical and beautifully voiced but elusive by design in its troubled search for identity.

There is more concerto-like display in the companion pieces. The joyous Alleluia, commissioned for the reopening of the Royal Festival Hall following its refurbishment in 2007, was originally programmed as an up beat to Beethoven’s Ninth Symphony and makes memorable and idiomatic use of the London Philharmonic Choir, with whom the composer himself has sung. The writing is characteristic in its insistent mix of glitter and grit, new (American) colours added to an eclectic pick of the 20th-century bran tub. Homegrown influences are more strongly felt in The Stations of the Sun (1998), a ‘carillonading and tumultuous’ yet emotionally engaging Proms commission of which composer-conductor Oliver Knussen made the first studio recording some years ago. The two share a fondness for skirling woodwind and meaningful harmonic movement.

If Vladimir Jurowski’s punchy performances were indeed captured live with only minimal patching, they are all three remarkably accomplished. Applause has been expunged and the sound is good too.

ANDERSON In lieblicher Bläue. Alleluia. The Stations of the Sun

(The) Stations of the Sun