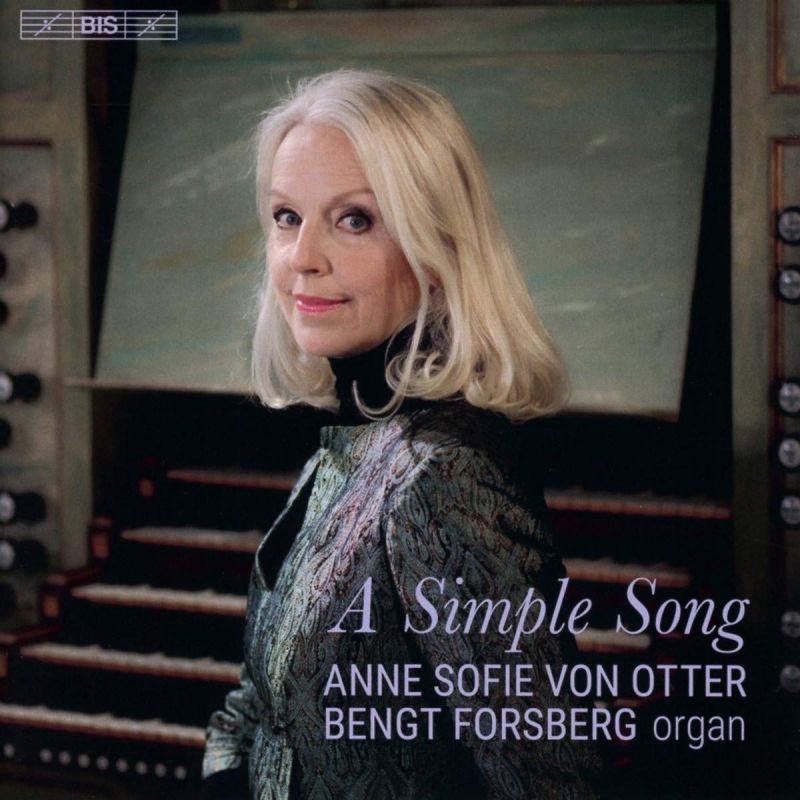 The heart might justifiably sink at the prospect of a classical star releasing an album that concludes with ‘Climb ev’ry mountain’. There’s no need, though, when that artist is Anne Sofie von Otter: ‘A Simple Song’ turns out to be a thoughtful, even challenging recital, given extra colour by the fact that Bengt Forsberg, her longtime song partner, here swaps his piano for the organ of the Stockholm church where the young von Otter started singing as a teen.

And, as the booklet for this new album points out, the songs here are far from simple, even if there’s a thread of straightforwardness, innocence or optimism running through many of them – summed up in the opening Bernstein track, performed with open-hearted sincerity. The constant blurring of lines between the sacred and secular – a sense amplified, of course, by the organ accompaniments – brings especially rewarding results, with the unexpected juxtapositions of composers and modes allowing us to hear their music (and their associated personal philosophies) from revealing angles.

The organ gives an unexpected hint of the ecclesiastical to a melting ‘Urlicht’ and a moving account of Strauss’s ‘Traum durch die Dämmerung’, while ‘Climb ev’ry mountain’ itself becomes a lot more than a rousing can-do motivational hymn. Performed thoughtfully and patiently, it is imbued – like everything on the album – with an extra dash of beauty and ambiguity. Some songs don’t work quite so well, with the accompaniment to ‘Es sungen drei Engel’, despite Forsberg’s imaginative registrations, sounding a tad galumphing at times, but the programming of secular Messiaen between sacred Duruflé, Poulenc and Martin proves an inspired touch. The two Pärt numbers (‘Es sang vor langen Jahren’ in its original version with just violin and viola accompaniment) are especially moving.

BIS’s engineers offer excellently balanced sound, and all the instrumentalists involved match the intelligence and thoughtfulness of von Otter’s singing. This is a delightful, surprising and thought-provoking programme – difficult to classify, perhaps, but very easy to enjoy.