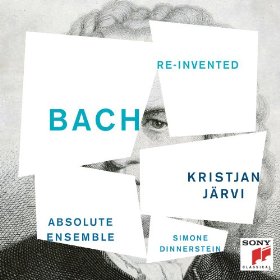 Here is a disc whose eclectic references make its classification elusive. Classical, jazz, crossover, rock, big-band, world music? It has elements of all. I think it’s rather special.

Simone Dinnerstein sets the scene with Bach’s Invention No 1. This and the two others she plays provide the launch pads for three multi-movement Bach ‘reinventions’ played by the amazing 16-piece Absolute Ensemble in which ‘self-taught and intuitive’ musicians work alongside conservatory graduates, directed by Kristjan Järvi.

Reinventions is the title of the Piano Concerto by Gene Pritsker (b1971). Each of its five movements, lasting between four and six minutes, is a fusion of rock, Baroque, Indian and African rhythms, hip hop, electronic effects, jazz improvisation and witty spot-the-quote references to JSB. Gershwin’s Rhapsody in Blue sought the same stylistic fusion back in the 1920s. This piece has similar aspirations but with broader musical aims and chic, contemporary cool.

toopART Reinventions by Daniel Schnyder (b1961) – concerto grosso for chamber orchestra, two keyboards and saxophone – is in eight short sections and no less entertaining, more big-band Bach than anything with crisp, detailed ensemble-playing and some spectacular solo work from individual members (how very naturally do some of Bach’s motifs translate into Orientalism). ‘Some 85 per cent of the pieces are composed,’ says Järvi. ‘The rest is improvised. The exciting thing is that no one notices when the written bits end and the improvisations begin.’ The brief Headless Snowman by Tom Trapp (b1980), which takes Bach’s F major Invention as its text, rounds off a sophisticated, stimulating entertainment.