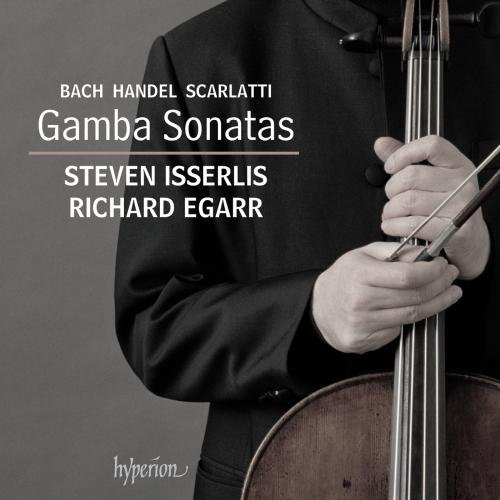 None of these pieces was written for cello and harpsichord, and at no stage does that matter one bit. Bach’s sonatas for viola da gamba and harpsichord may not have been conceived for that combination but they are such sublime creations that the identity of the instruments is perhaps the last thing that should worry us. Rather, it is the performers’ musicianship that counts, and in this case that is of high quality indeed.

Steven Isserlis makes no attempt to make his cello imitate the wispy resonance of the gamba, instead claiming the music for his instrument with vigorously articulated lines, robust technical athleticism and ravishing cantabile. Indeed, it is this wondrous singing quality – which never loses its bearing and employs vibrato only as one of its discreet expressive elements – that stands out in these performances, its presence felt above all in the slow movements, of course, but also constantly governing the sense of line in busier ones. Also telling is the profound awareness of architecture and the inter-relationship of movements, for instance in the gathering joy with which the finale of BWV1027 picks us off the floor following the sudden shaft of desolation that has ended the preceding Andante (astutely likened by Isserlis to ‘Es ist vollbracht’ from the St John Passion). In short, these are full-blooded but sensitive readings which, far from being contrary to Bach’s spirit, seem rather to magnify it.

Isserlis is excellently partnered at every turn by Richard Egarr’s bustling harpsichord-playing, though I would have liked a greater presence for it in the balance to give more definition to the unsupported bass-line. In the two non-Bach items – sonatas probably originally conceived for violin and continuo by Handel and Scarlatti (the latter working up a fiery head) – the balance works better, with Egarr typically inventive and Robin Michael’s lightly drawn doubling of the bass adding just enough weight without drawing attention to itself. Otherwise, they show the same quality in performance as the Bach – namely first-class.

Sonatas for Violin and Continuo