Bach to the Future 2 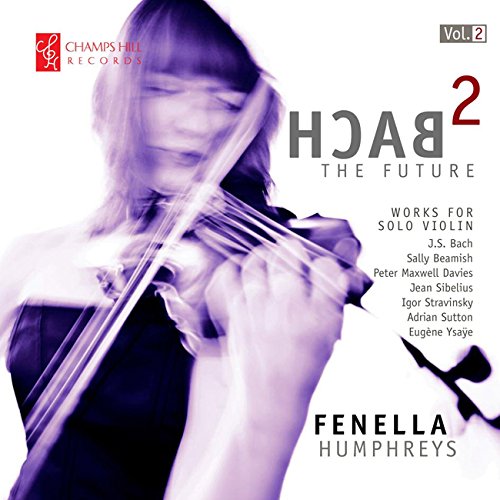 It’s not often that you can say that a commission, or set of commissions, fills a genuine hole in the repertoire. However, that’s precisely what Fenella Humphreys has bestowed upon the musical world with ‘Bach 2 the Future’.

The story goes that, having decided to take on the Bach Solo Sonata and Partita movements she’d previously shied away from, Humphreys found there to be comparatively little unaccompanied violin music to programme alongside them. Or, more specifically, very little British solo violin music. So she commissioned six new works from Cheryl Frances-Hoad, Gordon Cross, Piers Hellawell, Adrian Sutton, Sally Beamish and Peter Maxwell Davies, all of which were to use the Bach as their inspirational starting points. As a result, although Hilary Hahn recently commissioned 27 unaccompanied violin works for her own ‘Encores’ project, Humphreys’s commissions are excitingly fresh with their all-British focus.

So, now we finally have all six pieces in our hands (it’s three per volume, programmed alongside Bach and other solo unaccompanied works), the main take-home point is that every single one of the six is a glorious new addition to the solo violin repertoire. Vol 2 itself is a stylistic and emotional cornucopia of contrasts; it opens with Sutton’s Arpeggiare Variations, a deftly constructed contrapuntal exploration of the possibilities of the arpeggio. Then Sally Beamish’s Norwegian- and folk-influenced Intrada e Fuga is entirely different, as is Maxwell Davies’s melancholic Sonatina for Violin Alone, and Humphreys’s utter absorption and delight in all three shines forth at every turn. A particular joy is her realisation of the contrapuntal part-writing that is such a feature of these three and the other works on the disc, carving it with a strong-toned, easy fluidity and immaculate technique.

Both volumes will be making frequent returns to my stereo. More than that, though, the new works themselves deserve long wider performance lives beyond this beautiful beginning.

Bach to the Future 2