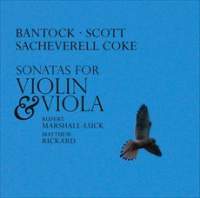 The works on this disc have been shrewdly chosen. Granville Bantock wrote his Third Violin Sonata in 1940, when he had retired from his longtime role as professor of music in Birmingham, where he was long an important influence. This Violin Sonata suggests a composer relaxing in strong, positive writing, with clear-cut thematic material confidently developed. In the first of the three movements the violin is accompanied by florid piano-writing before the solemn meditation of the central slow movement, with the meandering violin line given a simple chordal accompaniment. The finale is in lighter vein in a sharply rhythmic compound time, ending gently with a flourish. Altogether a work well worth reviving.

So too is the Viola Sonata – played by the same performers – of Cyril Scott, a seriously neglected composer who richly deserves revival. Written late in his career in 1953, this work begins with a meditation in which Scott discreetly introduces the whole-tone scale that he inherited from Debussy. The scherzo second movement is entitled ‘Humoresque’, aptly so in its jolly compound time. The finale begins with the piano alone, finally introducing a rich-toned viola melody. The movement ends with a two-minute coda marked energico, a satisfying conclusion.

Roger Sacheverell Coke was a rich dilettante who wrote beautifully wrought chamber music but who had little concern over promoting his work. Hence his neglect until this belated revival. This D minor Violin Sonata begins with a jaunty Allegro which, like much of Coke’s writing, betrays his love of the music of Rachmaninov. The Andante meditation of the slow movement leads to a Scherzo in compound time with a striking pizzicato section, while the Lento finale is rounded off with an epilogue marked Maestoso. Again a piece that richly deserves this revival and, like the other two works, inspiring Rupert Marshall-Luck on violin and viola and Matthew Rickard at the piano to give warmly committed performances, well recorded. An excellent issue.

Sonata for Violin and Piano No. 3