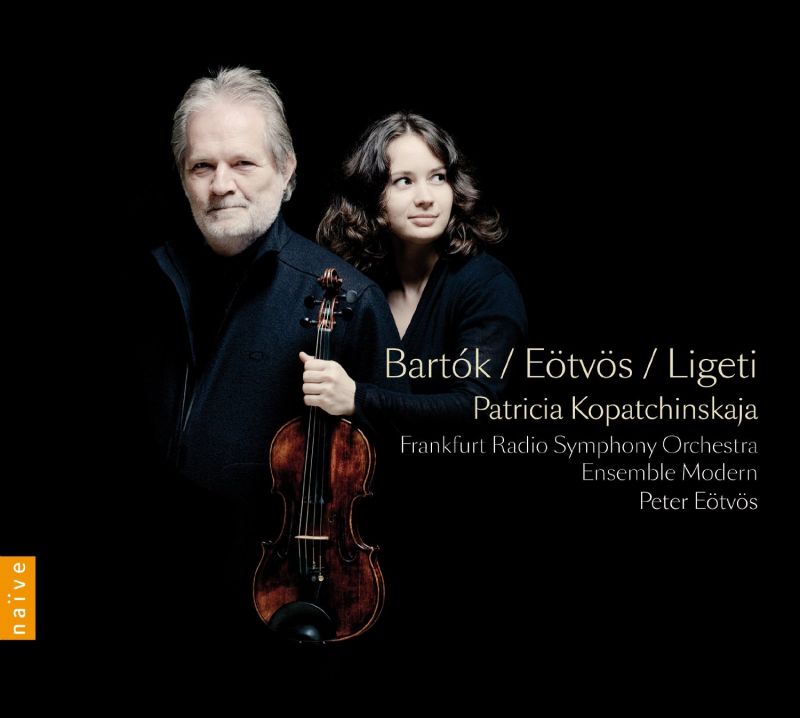 Patricia Kopatchinskaja performs these three concertos by composers born in Hungary with her trademark panache and the recorded balance gives her all due prominence. The importance of the orchestral contribution can’t be denied, however, and there’s an impressive sense of common purpose and collaborative zeal throughout.

Bartók’s Second Violin Concerto has long since been accorded classic status and in – my guess – making a determined effort to ‘think it new’, Kopatchinskaja and Eötvös sometimes risk exaggerating what is already pretty intense. The effect can be downright hectic; but it’s a mightily exciting account, which certainly doesn’t rush its fences or sell the score short. When Bartók slackens the tension and allows lyric reflectiveness to emerge, as in the first movement’s development, this performance is poetic and subtly shaded to a fault; and even though the second and third movements are usually played with a somewhat lighter touch, I found the sheer intensity of Kopatchinskaja and Eötvös’s advocacy compelling.

Such qualities are even more appropriate for Ligeti’s extraordinarily wide-ranging and idiosyncratic take on concerto form. Other conductors might underline the refinement of what are often delicate as well as febrile textures but this account goes for the jugular, projecting the music’s macabre and scintillating mixture of styles and moods with maximum precision as well as maximum virtuosity. In the culminating cadenza – which Ligeti asked the soloist to devise – Kopatchinskaja’s violin comes close to disintegrating under the force of her spectacular display and the final orchestral cut-off has never seemed more brutal. Even more powerful is the tortured serenity of the second and fourth movements, helping to mark the concerto out as one of Ligeti’s supreme achievements. Even in this company, Eötvös’s own work, seven, stands up well. This is a tribute to the seven astronauts who died in the Columbia space shuttle disaster in 2003 and the music’s ‘seven-ness’ extends to having six subsidiary solo violins distributed around the performing space. Pious restraint is no more in Eötvös’s vocabulary than it is in Ligeti’s; and even if the result teeters on the verge of kitsch on occasion, there’s no doubt whatever that seven merits repeated listening.