BATES The (R)evolution of Steve Jobs 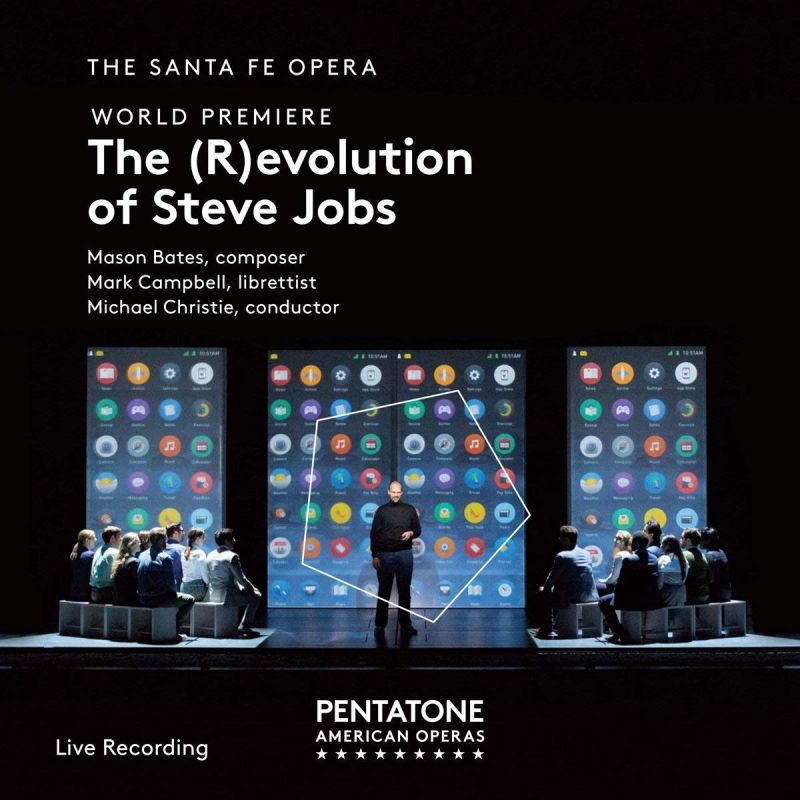 Mason Bates’s The (R)evolution of Steve Jobs was premiered in Santa Fe last year. Setting a libretto by Mark Campbell, it probes the contradictions in Steve Jobs’s character, presenting him as a visionary who perceived technology in aesthetic rather than scientific terms, a Buddhist who could, on occasion, be conspicuously lacking in compassion, and as a ruthless perfectionist who alienated many of those closest to him. It’s an ambitious work, though there are notable flaws in both dramaturgy and score.

After a prologue set in 1965, during which we see Paul Jobs giving his son Steve a workbench as a birthday present (‘It’s a fine place to start’), Campbell confines the action to a few days in 2007, during which Jobs, suffering from cancer and in denial about its seriousness, begins to feel unwell during a product launch, before engaging in an imaginary colloquy with his Zen teacher Kōbun, then confronting his wife Laurene, who threatens to put their marriage on the line if he doesn’t acknowledge his mortality and essential humanity. Fanning out from this basic narrative, however, are multiple flashbacks and flash-forwards to the rest of Jobs’s life and career, which prove problematic. The intention is that the eventual elision of past, present and future should encapsulate the evolution of Jobs’s Zen thinking, though it also results in considerable narrative confusion. Jobs’s relationships, meanwhile, with his Apple co-founder Steve Wozniak (‘Woz’) and his first girlfriend Chrisann Brennan, whom he treated abominably on discovering she was pregnant, are sketched in rather than fully explored.

Bates’s score grapples, at times unevenly, with the resulting complexities. Whirring electronics and post-minimalist rhythms convey both the exhilaration of technological discovery and the obsessive-compulsive workings of Jobs’s mind, while the drone of Tibetan temple bowls suggests the timeless world of Buddhist contemplation. Jazz riffs accompany Jobs and Woz as they build their first computer, and the opening Prelude of Bach’s Well-Tempered Clavier threads its way beneath the textures when Jobs draws rapturous comparisons between science and music. This is one of several set-piece arias in the score, of which the best is Laurene’s passionate remonstration with her husband at the work’s climax. Woz voices his anger at Jobs’s ruthlessness to a step-wise melody reminiscent of Barber’s Adagio. Chrisann introduces herself with a halting waltz, though Campbell’s treatment of her relationship with Jobs gives Bates little opportunity to fully develop her character.

Bates’s vocal writing can be taxing, though its challenges are all wonderfully met in the recording, which was made live during the first run. Edward Parks gives a terrific central performance as Jobs, capturing both his charisma and his cruelty in singing that swerves between persuasive elegance and caustic irony. Sasha Cooke makes a sensual, passionate Laurene. Garrett Sorensen is the Heldentenor Woz, Wei Wu the sonorous Kōbun, Jessica E Jones the graceful, appealing Chrisann. Michael Christie conducts with plenty of energy and verve, and the playing and choral singing are exemplary in their precision. The recording itself, superbly balanced, retains the applause. I didn’t always share the audience’s enthusiasm but it’s an impressive achievement nevertheless.

BATES The (R)evolution of Steve Jobs

The (R)evolution of Steve Jobs