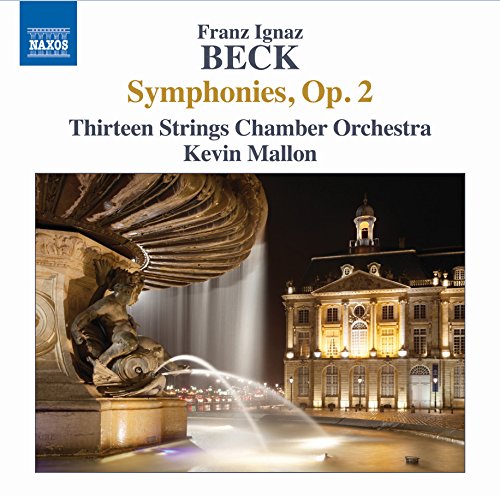 The high claims frequently made for Haydn’s Mannheim-born contemporary Franz Ignaz Beck (dubbed by the New Oxford History of Music ‘a Romantic born a generation too early’) centre on an arresting group of minor-key symphonies from around 1760. One of them, in G minor, turns up on this CD of Beck’s Op 2 symphonies, four scored for strings alone, two with added horns. With its fretful, jerky outer movements (the finale stiffened by bouts of Baroque counterpoint), it’s certainly the most vivid work on the disc. In the five major-key symphonies, striking gestures and quirky turns of phrase coexist with stretches of routine galant bustle. As in Haydn’s earliest symphonies, memorable tunes are at a premium, though Beck lacks Haydn’s gift for sustaining momentum over long stretches. But there’s much to enjoy in, say, the chamber-musical finesse of the opening Allegro of the A major Symphony, No 3, the brooding C minor Adagio of No 4 – shades here of CPE Bach – and the fizzing first movement of No 5, whose surface brilliance and pounding bass-lines proclaim Beck’s Mannheim heritage.

Kevin Mallon draws spruce, carefully shaped playing from his Canadian chamber forces, always alive to felicities in Beck’s part-writing. While the strings use vibrato sparingly, period instruments would have brought a more astringent edge to performances that tend to be urbane rather than combustible. The animal spirits of the triple-time Presto finales emerge here as distinctly subdued. That said, the players phrase the slow movements with grace and sensibility, and evidently relish the lusty exuberance of No 5’s opening movement, horns pealing out bravely. The harpsichord continuo is discreetly balanced and the church acoustic gives an attractive bloom to the sound. Allan Badley’s booklet-note is long on dry scholarship, short on illuminating advocacy of the individual works – surely a prerequisite with such unfamiliar repertoire.