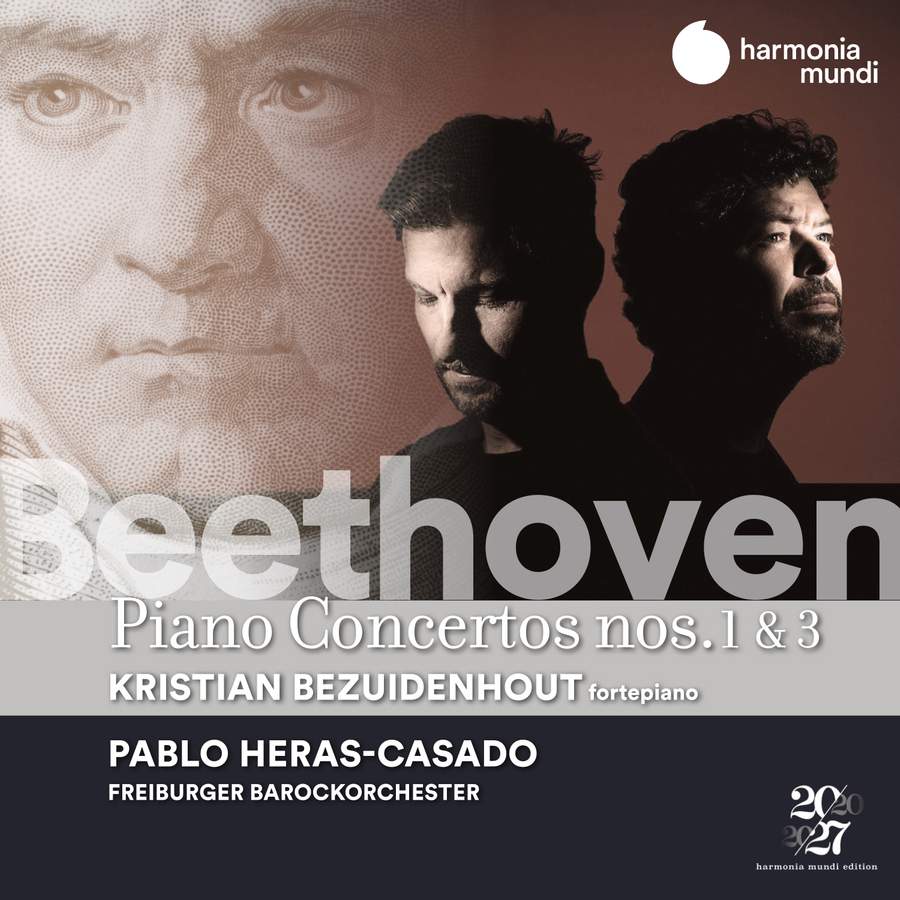 Remember the Beethoven semiquincentennial? The 250th-birthday celebration which was squeezed, contorted, if not ignored all together, in the face of a global pandemic? One of the most exciting, fresh and downright beautiful projects originally planned to coincide with that birthday party has now reached completion. I speak of course of the five piano concertos and the Choral Fantasy, played by Kristian Bezuidenhout and the Freiburg Baroque Orchestra under Pablo Heras-Casado. In 2015, as the musicians were touring Spain and Germany with the C minor Third Concerto, it was proposed they record all the concertos at once, during an immersive 10 days. Bezuidenhout writes in his booklet essay that several pianos were considered before settling on a single instrument for the series: Rodney Regier’s 1989 copy of a Graf from the collection of Edwin Beunk. First came the Second and Fifth Concertos (3/20), followed by the Choral Fantasy paired with the Ninth Symphony (9/20), and the Fourth Concerto, along with the Coriolan and The Creatures of Prometheus overtures (10/20). Now, a year and a half later, the series wraps up with the release of the First and Third Concertos. It’s been worth every second of the wait.

The C minor Concerto that Heras‑Casado unveils is tense, irascible, unpredictable, in your face. Freiburg’s superb wind band is luxuriously front and centre, with textures in the opening tutti embellished by the piano’s continuo. Once the solo part proper is under way, Bezuidenhout is less a Promethean figure than the rhythmically agile spirit negotiating the rugged, trepidacious terrain with an ear ever alert to the telling detail. The first-movement cadenza conforms largely to Beethoven’s original but leaves plenty of room for felicitous surprises. Bezuidenhout heightens the hushed sanctity of the Largo by engaging the moderator pedal and yet, this very quiet sound notwithstanding, produces an exquisitely expressive cantabile. The Rondo is perhaps the movement richest with opportunities for soloist and ensemble to go mano a mano, both seriously and playfully. Spontaneity, texture and the lofty quality of ensemble make this one of the happiest readings of this movement I can recall.

After the passionate drama of Op 37, the cordially ingratiating geniality of the C major First Concerto seems almost shocking. Common to both are Beethoven’s love of vivid contrast and sense of drollery. But in Bezuidenhout and Heras-Casado’s reading of Op 15, the full extent of the young master’s determination to charm the Viennese public is beguilingly displayed. Throughout the concerto, every gesture seems calculated to be persuasively winning. Closing the entire series of concertos with this most audacious of the lot makes perfect sense.

As a whole, these recordings stand as an important benchmark among original-instrument interpretations. But even more significantly, they open windows on to new vistas of Beethoven interpretation seldom glimpsed, admitting at the same time rooms full of welcome fresh air.