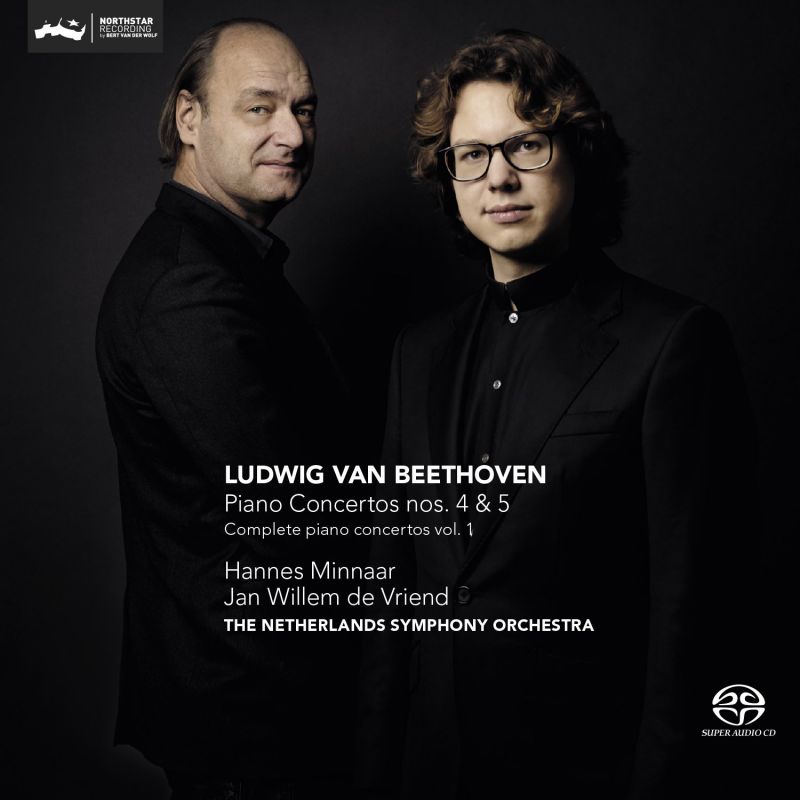 I’m not sure who’s the hero of the hour in this recording – the pianist, the orchestra or the timpanist. Beginning a Beethoven cycle with the Fourth and Fifth Concertos is a bold move but one that pays off in all sorts of ways. In the G major, Hannes Minnaar, just 30, shows great sensitivity in his solo opening, albeit not quite attaining the complexity of feeling implied by both Andsnes and Gilels. I like very much the orchestral response on this new version, the strings veiled, with barely-there vibrato. These are highly characterful readings from all parties – and not in a gimmicky sense. The opening of the Fourth’s slow movement, for instance, is strikingly gruff, with the string phrases abruptly curtailed (the Mahler CO are more sustained here). When Jan Willem de Vriend became Chief Conductor of the Netherlands Symphony Orchestra in 2006 he replaced new for old in the brass section. There is the odd unmanicured moment as a result (13'42" into the first movement of the Fifth, for instance), which may grate with some listeners, though I found it part and parcel of their general approach. The piano passagework, too, invariably bubbles with energy and subtlety of detail in Minnaar’s hands, not least in the finale of the Fourth, where the timpani and brass add a pungent earthiness to the proceedings.

The first movement of the Fifth is distinctly more playful than many readings, which again fits with the visceral immediacy of the orchestra’s sound world (there’s some lovely clarinet-playing here too from around 1'16"). Minnaar is carried aloft by the vibrato-light strings in the slow movement, and if he can’t yet unfurl Beethoven’s heavenly scales quite as raptly as Andsnes, that will surely come with time. The pacing into the finale is well managed, and again there’s a terrific sense of energy and interplay that is very winning.

Concerto for Piano and Orchestra No. 5, 'Emperor'