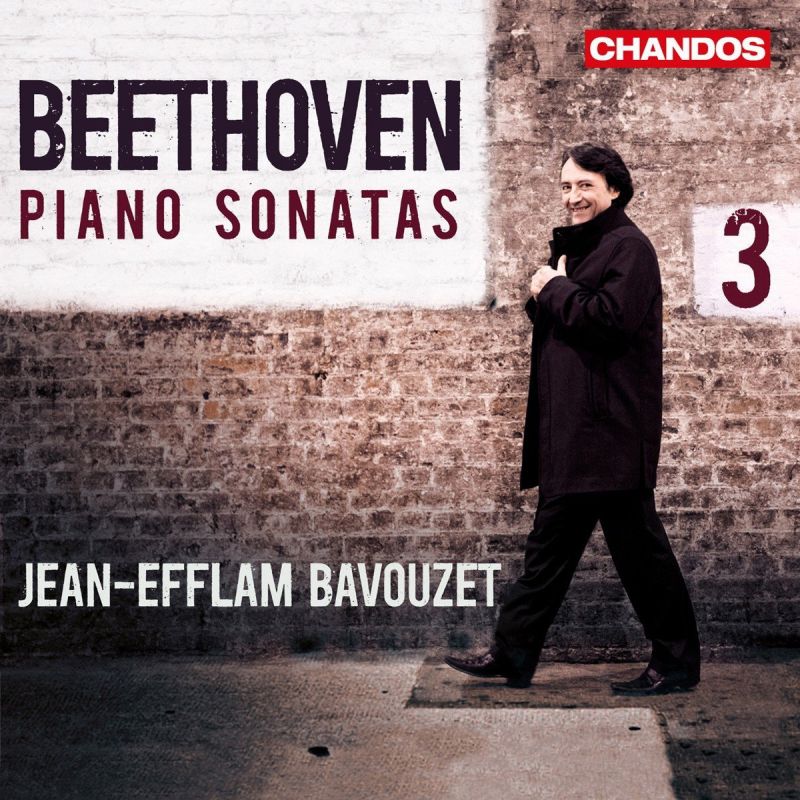 Here is the concluding instalment – Volume 3 – of Jean-Efflam Bavouzet’s chronological journey through the 32 Beethoven sonatas, a cycle which may have been matched by one or two but has not been surpassed, I would judge, in the last 30 years. Yes, it’s that good. I greatly enjoyed Volume 2 (3/14) and this is an even higher achievement. But then so is the music.

All the sonatas are here from No 22 in F, Op 54, which is the first of Beethoven’s four solo sonatas of his maturity to be conceived as two-movement works, to the last one of all, No 32 in C minor, Op 111 – which famously foxed its Viennese publisher when it arrived and made him wonder whether a third, final movement had somehow been omitted from the parcel (‘no, I didn’t have time to write one’). I love that story. The differing dualities and oppositions of Nos 24 and 27 (F sharp major, Op 78, and Op 90 in E minor) are also in this collection, so if you want to sample the quality you could make yourself a recital of these four, perhaps, and disappear, with Beethoven, into the silence at the end of Op 111, after the descent from the celestial trilling, where you feel nothing more could possibly be said in the domain of the piano sonata.

Bavouzet, in his prime, has two rare gifts as a Beethoven interpreter. He makes you feel that each sonata is not only all of a piece but that its structure and not just its surface has an audible power. Second, he conveys that what is experienced is indissolubly linked to its execution, both for the composer and for the pianist; the one illuminates the other. Before reflecting on these truths you’ll almost certainly be delighted by Bavouzet’s freshness of spirit, rigorous enquiry, openness to instinct and engagement with every aspect of this inexhaustible music. He radiates generosity and balance as well as a delight in being able to play the piano so well. You are aware of him and of the current that runs through – deriving not from his modesty, because he’s no shrinking violet, but from the force of a personality who knows that without Beethoven and the task in hand he wouldn’t be there. Just as it should be. The composer speaks and you wouldn’t mistake Bavouzet for anyone else.

The frame of sonority, colour and character in which each sonata ‘sits’ is tellingly judged. They are as individual as children. The subtleties of connection between movements in the A flat Sonata, Op 110, for example, emerge from under the player’s control of finger and perceptions of continuity. They don’t need to be flagged up but they occur as a feature in many of the sonatas and can be ruined by insensitive editing. Chandos’s production values here are as good as you would expect. There were three sessions (at Potton Hall) between the end of 2014 and the middle of 2016 but you could play through the set and take pleasure in the sound and imagine it was all set down in the course of a weekend. Bavouzet’s attention to the dynamic life of Beethoven’s sonatas is a model of what it should be: integral to the effect and character of them at any moment, never a decorative add-on. As with his control of tempo and movement, you know exactly where you are: fortissimo is not the same as forte, only perhaps a bit more, and what does a triple piano marking over the last chord of the first movement of the Appassionata Op 57 signify? When did you last hear a recording in which this registered as a degree quieter than pianissimo? Bavouzet wonders whether it’s meant to ensure that this movement, encompassing extreme violence and heart-easing gentleness, should end in complete resignation. He misses nothing and is excellent, also, on the dialectic of sound and silence.

The transparency of his playing brings treasures I would never wish to be without. He uses so little pedal but he is not dry and he can sing like a…well, one of Messiaen’s most eloquent birds, let’s say, and certainly not a French woodpecker! There is vividness even in the intricacies of the fugal finale of the Hammerklavier Sonata, Op 106 (No 29), deliberately written, as Bavouzet points out in his notes, to be extremely difficult to master. You get the feeling, with him, that you are in a rarefied region, not a thorn bush, near the limits of known territory, and yet the air is exhilarating. And what trills! Good to know that such quality is humanly possible. As it is with his execution of the six-octave upward rush in the Scherzo (disc 2, track 8). This is not a Hammerklavier Sonata that has been tamed; it is exciting enough for me. If you prefer a manner that is rougher, more explosive, that chucks fistfuls of notes around the heavens and sets the aspidistras flying, look elsewhere. I like this one because it resounds.

A small reflection: Bavouzet won first prize in the Beethoven International Piano Competition in Cologne in 1986, long before we knew anything about him in this country or had any recordings. He has been biding his time with the cycle of sonatas; no bad thing. Maybe his Haydn series, ongoing I trust, put down a marker for them.

Sonata for Piano No. 29, 'Hammerklavier'

Sonata for Piano No. 23, 'Appassionata'