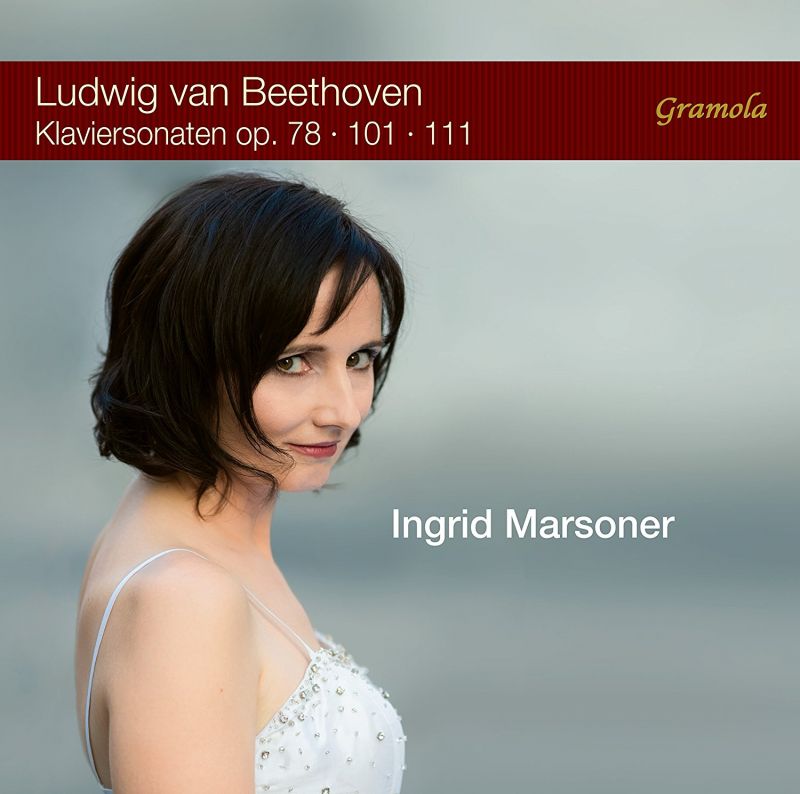 Over the past decade and a half, the Austrian pianist Ingrid Marsoner has released some seven recordings playing, in addition to the Viennese Classical masters, Bach, Hummel and Janáček. This new Beethoven recording, however, was my introduction to her work.

From the ample, upward yearning phrases that open Op 101, it is clear that Marsoner’s approach to Beethoven is direct, no-nonsense and free of eccentricity. She is willing to work within the parameters of contemporary thinking about Beethoven, fashioning from familiar tools a rich interpretative tapestry that is uniquely her own. Apt voice-leading features prominently in the first movement’s leisurely unfolding, presaging the sonata’s prevalent contentment. The Scherzo’s light tread proclaims it a march expunged of regimentation or bellicosity, progressing instead towards happy fulfilment. The searching Adagio is seamlessly folded into to that progress, culminating in a finale of crystalline polyphonic clarity, its folk-like digressions all the more delightful for their naturalness. A pert and understated Rage over a Lost Penny sets up a vivid contrast for the graciously welcoming lyricism of Op 78. The rollicking high spirits of the delightful finale are contagious.

It may be in the craggy, windswept heights of Op 111 that Marsoner is most impressive. Mercurially shifting moods in the Maestoso, from terrifying insistence, panicked uncertainty, to roiling struggle follow one another with an inevitable emotional logic. The sublimely serene cosmic regions in which the Arietta blossoms never seem static because of the deftly woven textures that constantly engage the imagination. Here, Marsoner’s ability to suggest the mighty integrity of Beethoven’s architecture from multiple points of view within the musical narrative is particularly impressive.

This is mature Beethoven which will be understandable by virtually anyone, even as it remains engagingly personal in expression. Without awe, Marsoner expresses her reverence for Beethoven with scrupulous attention to detail. This well-recorded disc will be a welcome addition to any library of Beethoven piano music.

Rondo a capriccio, 'Rage over a lost penny'