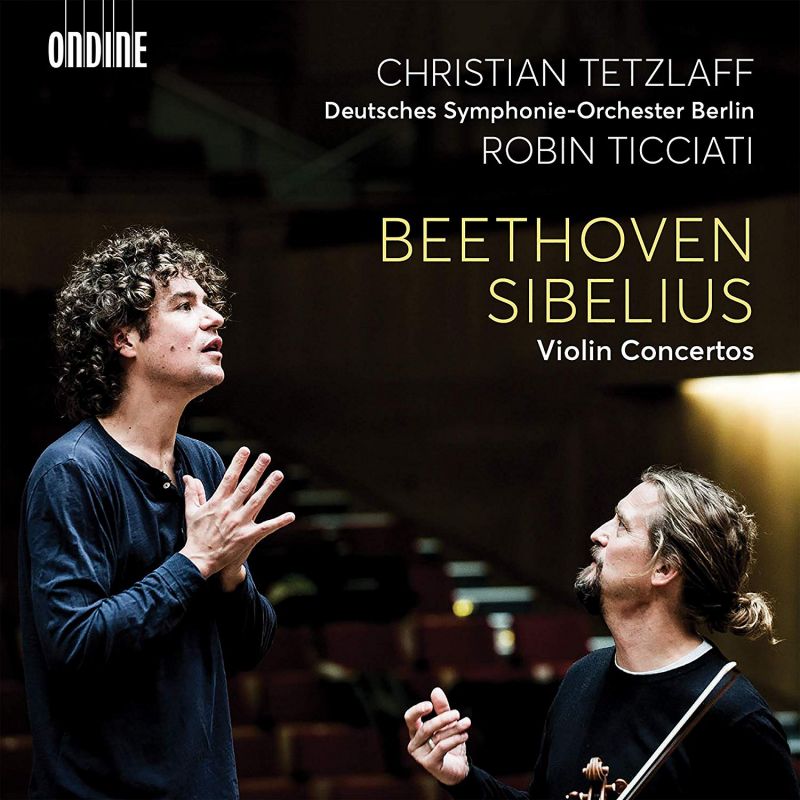 What we have here is by my calculations Christian Tetzlaff’s third recording of Beethoven’s Violin Concerto, the first two under Michael Gielen and David Zinman respectively. Having reviewed the latter in these pages back in June 2006, I noted then that ‘the main stumbling-block on so many rival recordings of this work is a sort of romantic reverence, a trend challenged by Zehetmair, Kremer and others. For all its many moments of profound repose, Beethoven’s Violin Concerto is a forthright, heroic piece, with boldly militaristic first movement tutti and a rollicking finale which Tetzlaff invests with numerous added colours. Following on the heels of Zehetmair, Kremer and Schneiderhan, [he] performs the violin version of the cadenza that Beethoven wrote for his piano transcription of the work, a playful excursion and a snug fit for his overall interpretation.’ This choice of cadenza has apparently been Tetzlaff’s preferred option from the age of 15.

Little has changed during the intervening years, at least in principle. Listening to Tetzlaff flying side-saddle through the Concerto last November (when this superbly engineered recording was made at Berlin’s Philharmonie), often with the utmost agility, reminded me that at the work’s premiere the composer’s violinist colleague Franz Clement – who was sight-reading Beethoven’s hastily finished solo part – is said, by some, ‘to have interrupted the concerto between the first and second movements with a solo composition of his own, played on one string of the violin held upside down’. Now do hear me out on this point. Tetzlaff may at times excitedly rushes his fences, but in collaboration with Robin Ticciati and his alert Deutsches Symphonie-Orchester Berlin, he transforms aspects of what so many have treated as a sort of Holy Grail (ie loftily reverential) into a beer tankard, the sense of unhinged inebriation gaining most froth in the outer movements’ playful cadenzas, which run wild in the first movement and ratchet up extra excitement for the finale. In fact, I don’t think I’ve ever heard a more excitable account of that closing Rondo. Here, as Tetzlaff himself says in a fascinating booklet interview, ‘the seriousness or solemnity sometimes surrounding the work is [also] completely suspended’. Of course, viewed as a whole the Concerto still emerges as the mighty edifice that it is, but it’s good to have a dose of typically Beethovenian rough-and-tumble thrown in as ballast.

The first movement’s serene central section (played in tempo) allows for a welcome spot of repose and elsewhere Tetzlaff’s sweet, delicately spun tone contrasts with, or should I say complements, Ticciati’s assertive, occasionally bullish accompaniment. The Larghetto is beautifully done, its effect underlined through the sheer energy and character of the outer movements. There’s never any doubt that what you’re listening to is a real concerto, a battle of wills, more in line with Zehetmair and Brüggen (who use Wolfgang Schneiderhan’s cadenza with timpani) or Kremer and Harnoncourt (a cadenza incorporating piano) than with the likes of Perlman, Zukerman or Kennedy. Who knows: maybe this is roughly what Beethoven originally had in mind? It’s possible, even probable. One thing’s for sure: never before has this indelible masterpiece sounded more like a profound precursor of Paganini.

If Beethoven’s Concerto emerges as uncompromisingly provocative, Tetzlaff’s Sibelius also errs on the side of danger. As risk-taking performances go, this one will have you clinging to the sides of your seat. Comparing it with his Virgin recording with the Danish National Symphony Orchestra under Thomas Dausgaard is especially instructive: in the finale’s opening, the ever-attentive Ticciati follows Sibelius’s wishes by cueing a gradual diminuendo before Tetzlaff enters, whereas Dausgaard carries on pounding at full throttle. Then again, in the passage leading to the second subject (from around 0'44"), under Ticciati Tetzlaff sounds as if he’s clinging on for dear life. Sibelius throws down the gauntlet by requesting a very fast tempo and Tetzlaff rises to the challenge. I shan’t pretend that the effect is entirely comfortable (the Dausgaard option sounds marginally safer) but it’s undeniably exciting. The Concerto’s opening is candidly emotional, with imaginatively deployed varieties of attack (a Tetzlaff speciality) and Ticciati again engaging his soloist with the utmost intensity, lunging fearlessly at Sibelius’s dynamic writing, whether the deafening growl at 7'07" or the movement’s fiercely driven close. As with the Beethoven, Tetzlaff is at his lyrical best in the Adagio. Both performances sidestep interpretative convention without either offending or displacing their finest rivals. In many respects, a real knock-out.