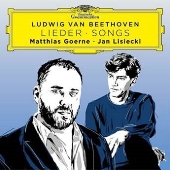 With so many detractors, Beethoven Lieder are bound to acquire revisionist defenders, the latest being Matthias Goerne, whose status among the world’s great Lieder singers suggests that his position is more sincere than knee-jerk musicological perversity.

Beethoven indeed expanded the medium’s range of possibilities mainly through the piano-writing, though his lack of literary insight in the vocal lines left the Lieder medium only partially transformed. His most notable contribution to the art form is An die ferne Geliebte, Op 98, which is often called the first song-cycle, with six Lieder integrated into a continuous piano part. But how often do you really want to hear it – and the Lieder that led up to it? Even in earnestly performed, well-recorded circumstances such as this disc, the answer would be ‘every so often’.

In the album notes, Goerne suggests that Beethoven’s Op 48 collection of six religious songs is the equal of An die ferne Geliebte, based on corrected editions that restore numerous cut stanzas. Neither Dietrich Fischer-Dieskau nor Hermann Prey left you feeling that you were missing anything, in performances with some Lieder cut down to a single stanza. With Goerne opening the cuts, I had hoped for some cumulative effect. But in these rather plain strophic songs with moralistic texts, I kept hearing Beethoven struggling to be Beethoven. There is unfairly neglected Beethoven out there (Christus am Ölberge, for example) but I just can’t get on board with Op 48. I’d even say that starting the disc with these songs dulled my perceptions to the charm and flashes of depth that followed in ‘An die Hoffnung’ (both Opp 32 and 94), ‘Adelaide’ and, at the end of the disc, An die ferne Geliebte.

Though Goerne has some unexpectedly light, sweet, upper-range moments that I hadn’t previously heard from him, his soft-grained voice feels undifferentiated for certain stretches and his reverence for the material seems to circumvent a more interventionist sensibility that might get closer to what Beethoven struggled to express. That’s what the hyper-alert Fischer-Dieskau brought to Beethoven Lieder in his live Salzburg disc – and more of what one got from Goerne’s own 2005 live recording of An die ferne Geliebte that hails from a different time, a different kind of focus as well as a somewhat different voice.

The major point of discovery here is Jan Lisiecki in his capacity as a Lieder accompanist. I greatly admire Lisiecki’s recent set of Beethoven piano concertos (11/19), and any time this collection gives him something substantial to do, his crystalline lyricism comes to the fore. His playing is more impulsive and less considered than Alfred Brendel in Goerne’s previous An die ferne Geliebte but still incredibly right in its own way. The periodic flourishes in the Op 32 ‘An die Hoffnung’ unfold like pearl necklaces, where every note has its own glow but builds on what came before and leads to what comes after.