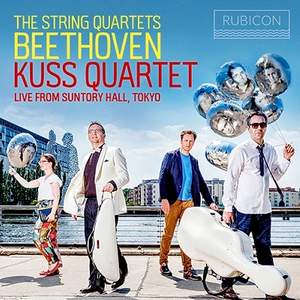 These 2019 live performances originate from an annual event at Tokyo’s acoustically accommodating Suntory Hall which, as part of its Chamber Music Garden Festival, climaxes with a complete cycle of Beethoven’s string quartets played by a single group. The Berlin-based Kuss Quartet (formed in 2002) play on Paganini instruments owned by the Nippon Music Foundation, a legendary set from Stradivarius’s Cremona workshop. Certainly, the instruments project a generous pooled tone, with plenty of edge where needed. As presented, the works follow their order of composition, more or less, rather than keeping to their purely numerical sequence, which means that the ‘late’ quartets run Opp 127, 132, 130 (which closes with the Grosse Fuge – the shorter, lighter rewritten finale isn’t included), 131 and 135. The Op 18 set runs Nos 3, 2, 1, 5, 4, 6, although most groups who take the chronological route favour 3, 1, 2, etc.

The performances are never less than vital, individual too in some cases. For example, in the A minor Quartet, Op 18 No 5, at the onset of the first movement’s development section (at 3'30"), there’s a marked broadening of pace, even more so soon afterwards, effective in terms of how it underlines the overall harmonic narrative, yes, but those used to the stricter manners of, say, the Takács, Elias or Artemis Quartets (on Decca, Wigmore Hall Live and Warner Classics respectively) might find the effect disconcerting. Even more so the opening of No 6 in B flat, at 0'25", where the tempo disruption on expressive grounds (again, a significant reduction) is yet more marked. Then, for the opening of Op 59 No 3 in C, the Andante con moto introduction is sustained at an extremely slow tempo, pp as written too, before at the onset of the Allegro vivace (1'27"), Jana Kuss haltingly weaves the top line, interesting once in a while maybe but distracting if you know it’s arriving at each encounter.

Having said all that, there isn’t a single instance throughout the set where unexpected gestures defy musical logic, even if what’s written on the page suggests otherwise. Teamwork impresses with its unanimity of gesture and secure execution. In Op 130, after an especially sensitive reading of the Cavatina, you hear the Kuss physically lunge at the opening gestures of the Grosse Fuge, which they attack with maximum intensity. In the second movement of Op 59 No 1 and the third of Op 127 their grasp of Beethoven’s singular brand of humour, both in terms of keen rhythms and lightning instrumental exchanges, is comprehensive, though I could have done with a lighter touch for the Scherzo of Op 135. But their handling of the various slow movements, whether in Op 59 No 1, at the start of Op 131 or the wonderful ‘Holy Song of Thanksgiving’ at the centre of Op 132, suggests parallel levels of understanding. Variation movements too (especially that from Op 74) come across as ceaselessly inventive.

These are, as I say, live performances (recorded applause is limited to a small number of works) and yet for most of the time the only evidence of their not being standard studio productions – aside from a palpable sense of interpretative electricity – is the odd shuffle on stage. I don’t think I spotted a single sniff or fidget from the audience. More important is a sense of sharing, and enough interpretative interest to draw you back a second, third or fourth time, even in spite of the odd doubt regarding this or that questionable detail.

As to live rivals, the Elias Quartet recorded at the Wigmore Hall are similarly fresh-sounding and flexible: try the opening of their version of Op 59 No 1, while their probing account of the slow movement is slower than the Kuss by almost three minutes; and in Op 18 No 6, although they start out in a no-nonsense manner, much as the Kuss do, there’s none of that toying with tempo a few seconds in. The Elias’s Sara Bitlloch is more closely balanced than Jana Kuss and, as an extra incentive, the Elias include two performances of Op 130, one with the Grosse Fuge as the finale and one with the shorter allegro rewrite. Still, given the choice, I’d opt for the fugue every time; and as the Kuss Quartet build the sequence of movements that leads to it with a humbling sense of inevitability, I hardly miss Beethoven’s simpler solution.

But I haven’t yet mentioned the fascinating bonus, an ingenious 12-minute homage, the Quartet No 8, Beethoveniana, by Bruno Mantovani (son of the celebrated ‘cascading strings’ crossover composer Mantovani). ‘Beethoven en route to Bartók’, you might call it, and it quotes fragments from all 17 quartets – the Grosse Fuge and Op 59 No 2 are powerfully conspicuous – ending with a mysterious reference to Op 127’s Adagio ma non troppo that morphs excitedly into the fiery fugal conclusion of the third ‘Razumovsky’ Quartet. It’s absolutely brilliant and deserves exposure in its own right. So an enthusiastic recommendation for the set as a whole, even though a final reckoning for a library choice has to favour the Takács, Artemis or Belcea Quartets.