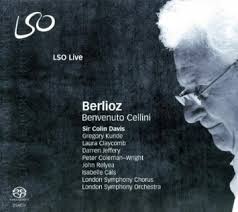 As befits an opera overflowing in every way, with musical gold bursting from each curve and crevice, thanks must first be given that this new Cellini is here at all. It has been bubbling away since Sir Colin Davis embarked on his second intégrale of Berlioz recordings in 1999, and in its final shape crowns the LSO Live series to which the Hänssler recordings of the Grande Messe des morts and Te Deum are sacred appendices. To experience it is to be enthralled all over again by a score of continually stupendous brilliance and invention. This much could also be said of the other two recent sets, conducted by John Nelson (Virgin, 1/05) and Roger Norrington (Hänssler, 5/07): recordings have been infrequent but always welcome, the principal reason for both states being the composer’s unfettered ambition in composing it at all: as David Cairns writes, Cellini “imagines a Paris Opéra as it might be in an ideal”; that being far from the case at the time, we are left with the messy alloy of versions and editions which makes every recording unique.

This one is less complete than Davis’s first. Like the 30-year-old Philips set (1/89 – nla), it is based on the version Berlioz created after the disastrous premiere in 1838 (which is recorded complete by Nelson). Davis has further cut some dialogue, and rounded some corners, most obviously the duet for the bandit-goldsmith and his beloved Teresa in Act 2 (a number which Cairns identifies as one of the work’s few failures). To these ears, however, it makes a good deal more dramatic and musical sense than the three-act carve-up Berlioz made at Liszt’s behest 15 years later.

Best of all, it runs a white-hot course through a story still disdained as incoherent or episodic, too epic to be comedy, too ironic for tragedy. What shines through the love and vitality behind every bar of this recording is the opera’s success at transcending such divisions. There is more than a degree of wish-fulfilment behind the 33-year-old composer’s identification with the Renaissance artist, adulterer and murderer, and Berlioz was as adept as Cellini himself in writing his own stories, in which the contradictions and confusions become celebrations of their own true natures.

In a score that grows and growls from the bottom up, Davis’s Berlioz sound comes into its own, certainly weightier than Nelson or Norrington but always watchful as the melodies and cross-rhythms cascade across the barlines. With Davis, we hear how Teresa’s aria makes Gounod’s Juliette (“Ah, je veux vivre”, 1867) quite the wet blanket; how the farewell trio, with its whispers of “à demain”, seeds its dangerous counterpart in the third part of La damnation de Faust (1845) – even how the tiny cor anglais solo in the dumb-show of the carnival prefigures the entry of Andromache in Act 2 of Les Troyens (1858). The chorus is no less impressive than the orchestra, most notably in the carnival finale to Act 1 when, as Liszt remarked, “for the first time in opera the crowd speaks with its great roaring voice”. There’s still no choral writing in opera to match it for sustained exuberance and indeed virtuosity, though Grimes and Moses und Aron are unlikely cousins.

When we come to the cast, it is all the more frustrating that the 1999 performances were not released, given that they were broadcast, and excerpts released on a four-disc set (Andante) celebrating the centenary of the orchestra in 2004. Gregory Kunde and Laura Claycomb are both fresh in voice and character, though marginally less vivid presences than they were for Nelson and Norrington respectively; Elizabeth Futral was unmatched for sexy confidence and Giuseppe Sabbatini had all the machismo needed, even for his show-stopping Act 2 “Sur les monts et les montagnes” (which Vickers did not attempt when he sang the role with comparably virile ardour – happily preserved and released on VAI). Other losses from the 1999 cast include Robert Lloyd’s matchlessly grumpy, sonorous assumption of Teresa’s father Balducci, and Laurent Naouri’s legerdemain as Cellini’s rival Fieramosca (he takes on Balducci for Nelson, without the requisite beef). Ascanio is a gift to a spunky mezzo-soprano who can hold a stage, and Cals (for Davis), Groop (Norrington) and DiDonato (Nelson) are all superb.

Perhaps Cellini would not be the joyous patchwork it is if there were such a thing as a perfect recording, and this one is further compromised by a wretched side-break in the middle of the Act 1 finale, just before the mime-show (not one track into it as the booklet libretto implies). It does, however, come as close as any and closer than most. As Peter Allen, late of the Met broadcasts, used to intone, bravos all round.