The first complete Trojans in Paris: an unforgettably dramatic experience 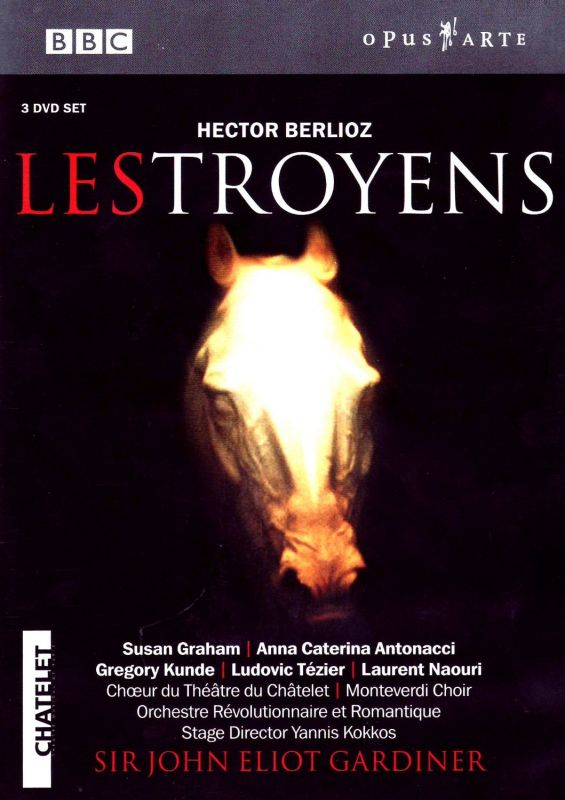 Les Troyens hasn’t fared well on DVD. James Levine’s 1983 Metropolitan Opera version (available only in the US) does feature Plácido Domingo, Jessye Norman and Tatiana Troyanos, no less, but in a dismally inadequate staging. Hugh Canning aptly crucified the mediocre Salzburg production conducted by Cambreling, with Deborah Polaski ill-advisedly taking both leads. Now, though, we have a superb authentic-instrument performance from the Théâtre du Châtelet, Paris in October 2003, to equal Sir Colin Davis’s pioneering original.

Orchestrally it’s everything we’ve come to expect from Gardiner’s Berlioz, his tempi swift and dynamic, sharing the composer’s delight in complex rhythmic interplay, yet always propelling the drama. Not at the cost of eliding detail, though; passages like Andromache’s entrance and Hector’s ghost have their proper gravitas and sombre hues against the brighter shades of Carthage. Colour, indeed, is the great gift of the period instruments, revealing a much wider range of sonorities and creating a sense of freshness and discovery. Some passages stand out – the chilling rasp of the brass in the Laocoön narration, the exciting saxhorns in the Royal Hunt – but the effect is universal: sometimes rawer, sometimes more classical, echoing Gluck and Spontini, but almost always more complex than the homogenised modern sound, and even more dramatic.

Gardiner’s singers, too, could hardly be more committed. Anna Caterina Antonacci, Glyndebourne’s fiery Ermione in 1995, is an even more fiery Cassandra, superbly classical-looking and so wrung and tormented that some moments of strain scarcely matter. Gregory Kunde is no Vickers, but he tackles Aeneas with ringing tone, looks and acts pretty well, and brings a welcome bel canto touch to the gorgeous duet. Susan Graham, though, needs no caveats: a radiant Dido, queenly yet youthful, lyrical and lighter-toned than Janet Baker but in her final despair no less tragically moving – and there’s no higher praise. However, the finale she sings is very different from Baker’s recording, and every other.

Here, with the help of Hugh Macdonald, editor of the definitive 1969 edition, Gardiner has restored, albeit shortened, the earlier, stiller conclusion, in which Dido dies without her vision of Rome triumphant. Instead a single hushed line – ‘Fuit Troia. Stat Roma’ – is sung by the muse of history, Clio – here also Cassandra. It’s undeniably effective, but I miss the fiercer, more ironic usual version, especially in Baker’s magnificent excerpts on EMI.

The stage is plain and bare, capped by a reflector in which most of the décor appears: an Italian Renaissance cityscape for Troy, and the Horse only as a menacing head. Carthage is a classical vision of white walls and blue sea with stylised ships. The Trojans wear the inescapable greatcoats – someone must have a job-lot somewhere – the brutal Greeks, inevitably, American combat gear, and the Carthaginians vaguely North African whites and pastels. The Royal Hunt‘s surging sexual energy is poorly represented but this is a mostly straightforward, lively staging which lets characters and drama speak for themselves, and therefore works well on screen. The magnificent high-definition recording does it ample sonic and visual justice.

Greatly as I revere both Davis CD versions, and the Baker/Gibson excerpts, for anyone who loves Les Troyens, this is just as revelatory, just as essential.