A great performance of a historic production of Berlioz’s masterpiece 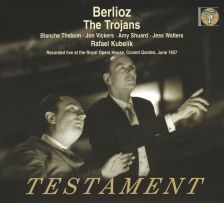 This 1957 production of Berlioz’s epic five-act opera was the first modern attempt to stage the whole work in one evening at a major house. As David Cairns, Berlioz’s biographer, points out in his booklet essay, the production had been preceded in Britain by efforts, some of them amateur ones, to come to grips with what many people had said was impossible. Sir David Webster, the pioneering manager of Covent Garden, and the then musical director, Rafael Kubelík, had set their hearts on bringing the work to the stage in as complete a form as possible. Sir John Gielgud was the director, and it must be in some measure due to his influence that the diction of all concerned is so clear, declaiming Edward Dent’s translation.

It is difficult not to approach this historic broadcast without some feeling of awe. There was no tradition of performing the work in modern France (indeed, it had never been performed there complete). The material available, long before any definitive edition had been made, was in poor condition, and in some instances inaccurate. Everyone involved was approaching his or her role for the first time. Yet from the moment Amy Shuard as Cassandra utters “The Greeks have quit the plane”, one is gripped by the recording, the performance and, as always, above all the work itself.

Shuard was on the threshold of her international career then. She made hardly any commercial recordings but in recent years several off-the-air issues have emerged, of which this is one of the most vivid. Blanche Thebom, as Dido, does not immediately make such an impact, yet by the time the love duet, “O sweet night”, is reached one is captivated by her warm personality. Jon Vickers’s Aeneas is well known: he recorded the role complete and in French some 12 years later for Sir Colin Davis (Philips, 12/86); here, singing in English, and more youthful-sounding, he makes a superbly positive hero. His great aria in the final act, “There is no turning back”, is one of the many highlights of the set. There are so many other names that might be singled out; but suffice to say that the whole is a fine souvenir of the Covent Garden ensemble in that time. The sound is adequate for a 52-year-old tape (splendidly remastered by Paul Baily). I suppose this must be of interest principally to English-speaking listeners, but those from other countries – even France – may find themselves swept along, above all by Kubelík’s command of this grandest of all French operas.