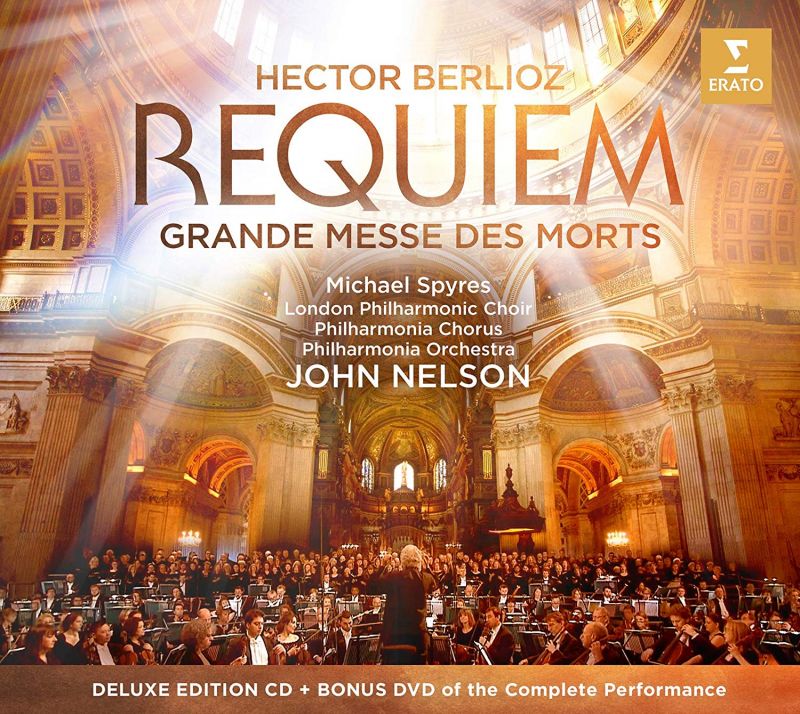 We’re immediately back on the old concert Requiem dilemma of devotion or drama. Leading candidates on disc from the past (Munch, Beecham, the first Colin Davis, McCreesh) have tended much towards the latter – the work as an acoustic-challenging explosion of sound and space and, inevitably, a test of a recording team’s ability to capture that. John Nelson, the relative newcomer in the middle of an occasional but continuous and clearly devoted new Berlioz cycle, goes (perhaps unpredictably) for the first – a Giulini rather than a Toscanini, to take a parallel from another Requiem’s recorded legacy.

The result is taken from a 150th anniversary concert for the composer last March in the reverberant honeytrap of London’s St Paul’s Cathedral. It’s a reading with especial attention paid to winds and orchestral brass, which interestingly shifts the focus of one’s normal concentration to what a darkly serious – and beautiful – score the atheist Berlioz created. In this impression the carefully prepared singing of the two orchestra choirs, and the detail which Nelson and his assistants have secured from them, play the fullest part.

It also sounds to me – especially on the DVD, where you can almost see it happening – that this conductor has been outstandingly careful about the notorious acoustic. Any complaints registered about its effect in reviews of the concert are hardly apparent on these recordings of it. Are the offstage tenor (Michael Spyres, beautiful) and brass placed nearer in than what has become customary in such a venue? It certainly looks like it; they are heard most clearly, if less operatically. The recording, in general, has lovely brass tone and is most sensitive to Nelson’s wide dynamic range. The filming is neatly attentive to the linking of Nelson’s (batonless) beat to the singers, with not too much touristic tracking of the building’s architecture.

If you believe that a Requiem, this one especially, should be a soundtrack to the Last Judgement, you should listen elsewhere, especially to that first Colin Davis (now on Decca, 9/70). If the text above all, and the atmosphere of an event contemplated, satisfies you, there are few better options around at the moment than this latest arrival, another high point in Nelson’s work for the composer.