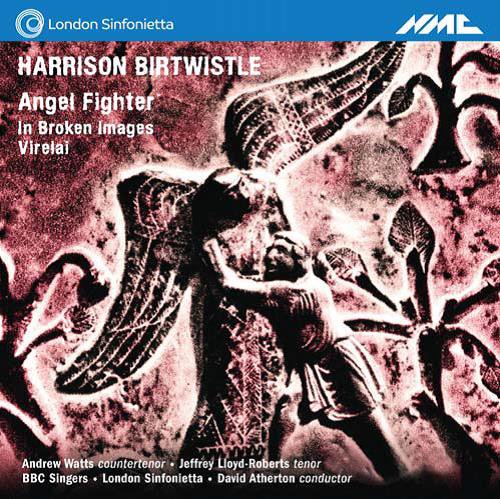 As co-founder of the London Sinfonietta in 1968, David Atherton has been responsible for several Birtwistle premieres down the decades: his first was the English Opera Group production of Punch and Judy, just as the Sinfonietta was being set up. Now, more than 40 years on, they and Atherton return with a group of recent Birtwistle scores; and anyone in 2015 disposed to expect ageing dinosaurs going through the motions should be struck by the energy and sharpness of response in these recordings.

Sharpness – remaining consistent without falling back into cliché – is also what Birtwistle’s music is about. The poem by Robert Graves that lies behind In Broken Images refers disarmingly to ‘a new understanding of my confusion’ as a result of becoming ‘sharp, mistrusting my broken images’, and Birtwistle’s music today is just as lacking in complacency as it was in 1968. Angel Fighter starts with the advantage of a pithy text by Stephen Plaice, librettist of The Io Passion (one of several large-scale Birtwistle works still awaiting commercial recording), and this ‘dramatic episode from Genesis’ depicts the brutal confrontation between a human sinner, Jacob (tenor), and an implacably euphonious angel (countertenor). The moral, for a secular age, might be that human uncertainty and pain are bound to be more true to life than angelic confidence and calm – or so Jacob’s ascending vocal line at the end, refusing to emulate the angel’s self-assurance, seems to suggest.

Angel Fighter owes as much to terse commentaries from choir and instruments as to extended dialogues between the admirable solo singers, and Atherton couples scrupulous attention to detail with exemplary alertness to the steadily unfolding shape of the whole. In Broken Images is no less vividly realised, its fractured progress from celebratory rite to desolate yet resolute ending ringing fresh changes on familiar Birtwistle sound materials. With Virelai, a short, sharp rejigging of ancient musical fragments in an entirely contemporary spirit, this CD is a pungent and persuasive statement about what properly serious music can achieve today.