Birtwistle The Mask of Orpheus 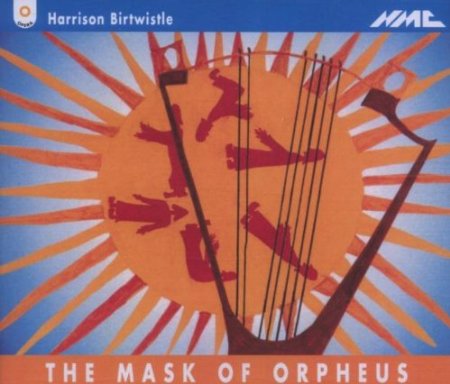 I wouldn’t normally make such a recommendation, but can I earnestly suggest that, at least for a first hearing of this remarkable work, you do not follow the libretto, nor the synopsis, nor even the track list? Birtwistle’s opera is about the Orpheus myth, but the familiar story has been fragmented, several different versions of its main events being presented, sometimes simultaneously, often non-chronologically. Each of the principal characters is represented by two singers and a (silent) dancer, and much of what happens is not directly described in the libretto.
Listening ‘innocently’ you will not be able to follow all of what is being sung; at times very little (the text is sometimes broken up; some passages, including much of Act 3, are sung in an invented language). Rituals are often at their most powerful when they appeal to the imagination rather than to reason, and here the sense of ritual is awesomely powerful: solemn and often gravely beautiful in Act 1, much tougher and more complex but at the same time hugely exciting in Act 2 and with a formidable, gathering sense of culmination in Act 3. It is an extraordinarily patterned opera, with many varied repetitions, all meticulously labelled (“First Structure of Decision”, “Second Time Shift” and so on) in the score. Again, I think it important not to worry too much about these until the sound of the opera has worked its spell. There are, for example, six scenes or interludes (intended to be mimed by a separate cast) which are accompanied by an electronic tape. The music of these scenes is so spectacular and works so strongly on the imagination that I suspect it might be more of a hindrance than a help to know in advance what they represent. This is an opera which, to borrow a phrase from Gertrude Stein, “describes things without mentioning them”.
And it is an opera in which everything happens in the music. The ritual repetitions, the elaborate patternings and allegorical structures make their own effect. In the boldest of these, the 17 ‘arches’ over which Orpheus passes in his quest for Eurydice in Act 2, Birtwistle aids comprehension by quite extensive use of speech. But the music says far more than the sometimes enigmatic words, and the ceremonial retelling of the whole story in Act 3, a sequence of mysteriously dramatic episodes framed by verses of a song, would perhaps have less impact if the words of that song were comprehensible. Birtwistle communicates his refracted but gripping myth with, above all, orchestral colour: an orchestra of wind, percussion and plucked instruments (plus tape, sampler and a small chorus) used with vivid mastery. The sheer sound of this opera is quite haunting and, not least at the end when the myth dissolves, moving.
The Mask of Orpheus is, I think, a masterpiece, and this performance is fully worthy of it. There are no weak links at all in the extremely fine cast. Although it is unfair to single out any singer for special mention, Jon Garrison’s portrayal of Orpheus the Man is outstanding. The recording, direct and pungent but by no means lacking in atmosphere (the electronic tape is pervasive in the right sense: it is the voice of Apollo), leaves nothing to be desired.'

BIRTWISTLE The Mask of Orpheus

(The) Mask of Orpheus