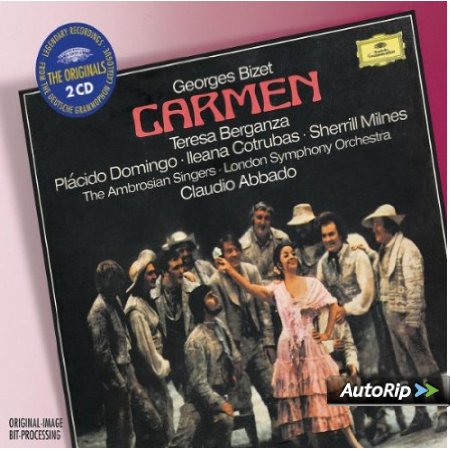 This notable recording followed immediately on the famous Faggioni production at the 1977 Edinburgh Festival, a staging finely observed enough to remain in my mind until today. In it Berganza declared her aim of rescuing the role from bad traditions and from its insults to Spanish womanhood. Her reading was restrained haughty, but no less attractive and haunting for that. She developed the character, as she does on the records, from carefree gipsy to tragic woman and, in doing so, is scrupulous in her obedience to Bizet's notes, rhythms and dynamics. Nothing is exaggerated yet nothing is left out in this sensuous yet never overtly sensual portrayal, bewitchingly sung. Maybe you don't feel quite the full engagement of her emotions in her entanglement with Jose, but better a slight reticence than overacting. I suppose I find Migenes, on the Maazel/Erato set more immediately seductive, and occasionally more varied in tonal colouring, but Berganza is the more subtle artist.
She works in keen rapport with Abbado, who brings clarity of texture, Mediterranean fire, and intense concentration to the score. You may find more elegance, more Gallic wit in, say, Beecham's famous EMI set, not yet on CD, but only Maazel of other conductors comes near Abbado's emphasis on close-knit ensemble and histrionic strength—and both their sets come as the result of experience of 'real' performances. Domingo benefits here, as on the Maazel, as distinct from the Solti (Decca), in the same way, being more involved in affairs. Like his Carmen, he sometimes wants variety of colour in his singing, but its sheer musicality and, in the last two acts, power, count for much. Sherrill Milnes, not in the Edinburgh cast, is at once virile and fatuous as Escamillo should be, but he isn't the equal of Jose van Dam (Solti) in the right sort of voice and diction, i.e. Francophone. Cotrubas makes a vulnerable touching Micaela. Robert Lloyd, the Zuniga speaks and sings in excellent French, and is the most engaging of the supporting cast.
The dialogue is heavily foreshortened as compared with the rival sets. Abbado chooses some of the questionable Oeser alternatives, but—apart from the one in the finale—I do not find them disturbing. The recording is absolutely first rate, well balanced between voices and the secure LSO, and forward without being in the least confined. Though I have a definite liking for aspects of the Maazel, the Abbado is now my CD recommendation.'