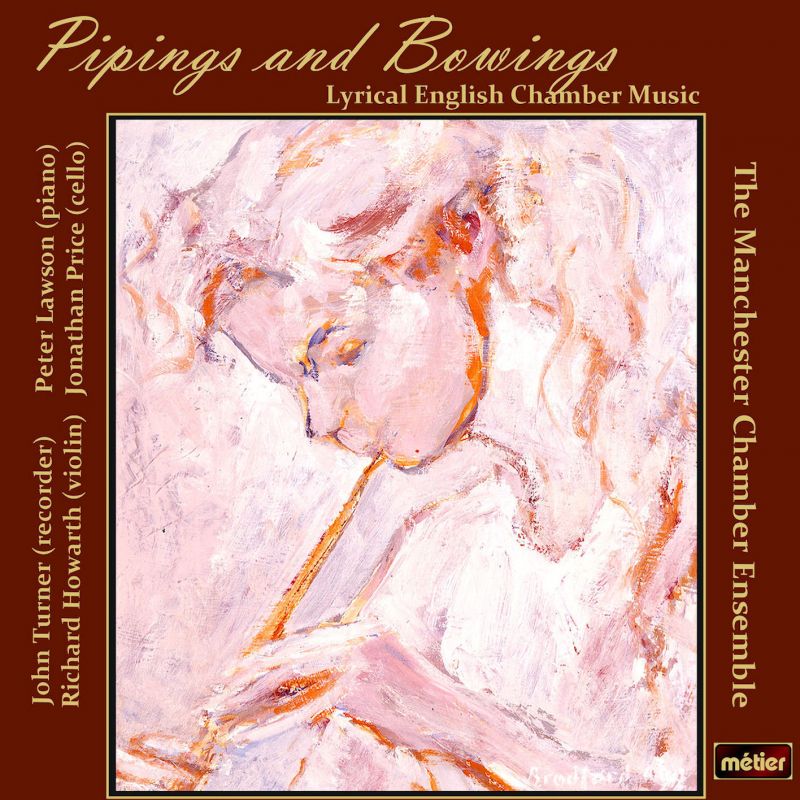 This recital brings together a sequence of 10 brief works by three British composers, in music above all designed to please rather than challenge. Michael Hurd (1928-2006), after studying at Oxford, held various musical posts before deciding to divide his time between composing and writing books. For a time he studied with Lennox Berkeley but his music is markedly more tuneful than that of his mentor, always easily lyrical with most of his works here ending with a jauntily attractive finale. The three-movement Violin Sonata is the most substantial work, ending with the longest movement, a set of free variations, the concluding one the most light-hearted. The Five Preludes for piano are charming miniatures, nicely contrasted, leading to the Sonatina for recorder and piano, with a central songful slow movement and jaunty finale. Similar in layout but even more compact is the Three-Piece Suite for recorder and string quartet, dominated by the recorder.

Robin Milford (1903‑59) was the son of Sir Humphrey Milford, founder of the music department of Oxford University Press. He studied at the Royal College of Music under Holst and Vaughan Williams, and became a close friend of Gerald Finzi. Many of his works were designed for children either to play or to hear, and with his connections his music was regularly published by OUP. Yet he suffered from depression and the death of his only son along with the remaindering of all his published music led him to commit suicide.

The immediate attractiveness of most of the works bears out their aptness for children, though the the Fantasia for string quartet (1946) is an exception, a deeply felt work, just over seven minutes long, composed as a memorial on the death of his mother. That he could write such a carefree work as his Three Airs for recorder and piano not long before his suicide seems in total contrast with his depressive temperament, as do the other two works for recorder, the Sonatina and Christmas Pastoral, also written not long before his death. The final work on the disc, the Concerto for recorder and string quartet by Richard (here described as Dick) Blackford (b1936), is in effect a three-movement work framed by a brief Prelude and Postlude. Manchester-trained, Blackford has spent most of his career teaching, contributing music when projects for his pupils demanded it. The Concerto has a mysterious slow movement with a central scherzando section, leading to a dazzling finale full of virtuoso fireworks before the measured Postlude.

Performances are first-rate from the soloists, notably the recorder player John Turner, who displays astonishing feats of tonguing in fast passages, as well as from the string quartet of the Manchester Chamber Ensemble, led by Richard Howarth. Not surprisingly, the sound tends to favour the recorder.

Concerto for Recorder and String Quartet