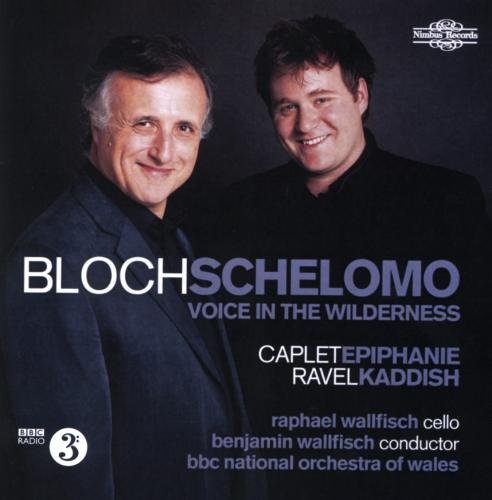 There are few composers of such profound sincerity and absorbing interest as Ernest Bloch. He said that he had no desire to archive the music of the Jews but that the intention in his own music was to capture the Hebrew spirit in ‘the complex, ardent, agitated soul that vibrates in the Bible’.

In Schelomo, the Hebrew word for Solomon, the cellist Raphael Wallfisch communicates the sombre message of the great king in the book of Ecclesiastes, that ‘all is vanity’. Bloch’s Schelomo is by turns devotional, majestic, introspective and dramatic, and the cellist captures all these facets in an astonishing portrait. The orchestra are in fine form under the soloist’s son, who keeps a clear head in a complex score, ensuring that every detail is in focus, the climaxes awesome.

The symphonic poem Voice in the Wilderness has no biblical link though the title suggests a kinship; likewise the modal idiom of Middle Eastern music and the calling of the shofar (ram’s horn) in the orchestration. There are six meditations, in which the cello takes the role of commentator on the preceding music, as it journeys from world-weariness to ‘the victory of the spirit’, with father and son perfectly partnering each other as they traverse the emotional contours of this strangely moving piece.

The delicate imagery of Epiphanie by André Caplet is a fine contrast to the Bloch pieces. It depicts the arrival of the black king Caspar to honour ‘the King of the world’. The French composer creates a fascinating oriental sound world that the cello first embroiders, then dominates, taking the central role in a long cadenza over a drum-beat in the middle movement, before an exotic final dance for the king’s young retainers. The musical narrative is realised in a beautiful performance. Ravel’s Kaddisch, his deeply felt homage to Jewish music, carries an authentic ring and completes this memorable recording which is dedicated to the many members of the Wallfisch family who perished in the Holocaust.

Voice in the Wilderness