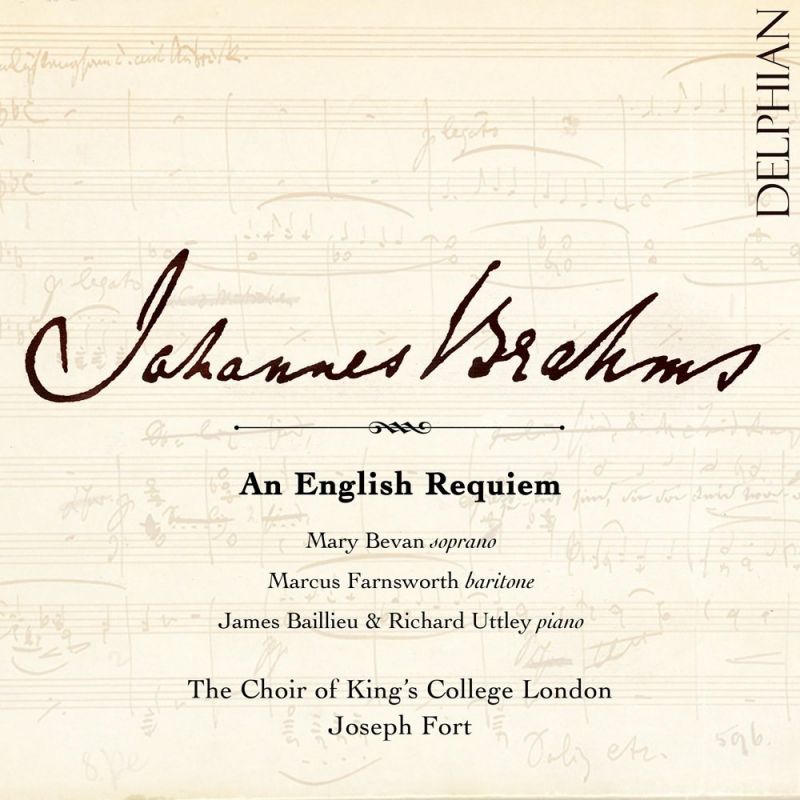 Listeners familiar with Ein deutsches Requiem may experience some cognitive dissonance from the outset, hearing the closed English ‘are’ vowel against the open and more singable ‘sind’. Such ‘minor infelicities’ are acknowledged by the Brahms scholar Michael Musgrave in his valuable booklet essay and gradually dispelled by a number of factors: the neat expedient of printing the original German opposite the Victorian-era text used here; the sweetly modulated young choral voices; and the spacious but secular ambience captured by Delphian in the hall of Trinity School, Croydon.

The school’s own Steinway D is placed front and centre by the engineers, and a magnificently even-tempered piano it is too, with a rolling bass that supplies some of the bottom-end resonance missing from the choir’s disposition of 11.5.4.6. In the Requiem’s heaven-storming moments, this is a serious drawback: the third-movement fugue cannot be launched in so matter-of-fact a fashion without undercutting its Handelian dignity and significance as a structural capstone. Joseph Fort otherwise leads a well-paced account that achieves a calm and noble strength of expression in the symmetrical outer pillars. He cultivates some keenly communicative diction, though I can’t help hearing ‘incorruptible’ rendered as ‘in a runcible’: perhaps in Brahms’s uncertain hereafter, spoons will be provided.

Like other conductors of the ‘London version’ of the Requiem, among them Harry Christophers, Laurence Equilbey and Simon Halsey (the best of the bunch, I thought, in July 2011), Fort has prepared his own performing score from the composer’s four-hand reduction of the entire score, removing most of the choral doubling and reinserting some instrumental felicities here and there. James Baillieu and Richard Uttley outshine the competition, however, with playing of admirable power and refinement, in no danger of swamping the formidable King’s soprano section and sustaining a rhapsodic cantabile that is not quite matched by the close-miked soloists. However, as Brahms’s English Requiem, the disc deserves a place in the catalogue to itself.