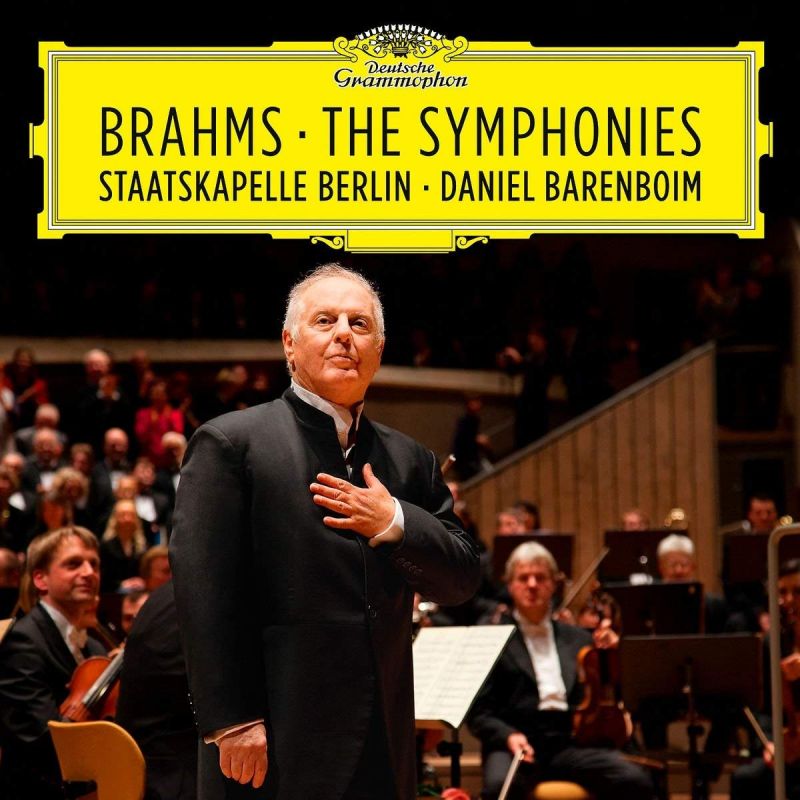 What a difference an orchestra makes: an orchestra, mind you, that has been nurtured and honed for the best part of a quarter of a century in music it was born to play.

The Berlin Staatskapelle is an opera orchestra that also plays concerts, which explains why, when Daniel Barenboim inherited the Berlin State Opera in 1992, Beethoven was a priority as well as Wagner. Now it is Brahms’s turn in a cycle of the four symphonies of rare pedigree and worth.

The recordings were made in Berlin’s newest hall, the 700-seat Pierre Boulez Saal of the Barenboim-Said Akademie. The blend of clarity, intimacy and power the engineers have been able to achieve here fits the lustre and glow of these Staatskapelle performances like a glove.

This is Barenboim’s second recorded Brahms cycle. The first was with the Chicago Symphony in 1993, just two years after he inherited the orchestra from Georg Solti. If the Chicagoans had once boasted a distinctive Brahms sound, it had long gone; textures had become glossy, rhythms streamlined, with little room for the kind of indwellings Brahmsians of the old German school would have taken as a given.

Compare the fierce and generally joyless Chicago account of the finale of the Second Symphony with the new Berlin version, where the music bides its time, rhythms are gently sprung and the stage is properly set for the symphony’s culminating hallelujahs. Or compare the deep ochre of the Berlin cellos and the speaking beauty of their phrasing at the start of the symphony’s slow movement with the rather swifter Chicago performance, where the phrasing has the feel of painting by numbers.

When Barenboim took over this former East German ensemble, he described it as ‘as little bit like encountering a wonderful collection of antique furniture; the workmanship was superb but there was a thick layer of dust over everything’. Such has been his painstaking work in the tonal forge of Brahms’s music these past years that what we now have are sounds the like of which have probably not been heard in Berlin since the Furtwängler years.

Some will prefer Brahms with lighter strings and yet more forward winds. But not the least of the wonders here is that, despite the more ‘blended’ sound of the Berlin winds or the strings’ cultivation of what Furtwängler would have called ‘a true legato’, textures are never clogged or detail suppressed. Quite the reverse, in fact, such are the players’ skills and Barenboim’s own meticulous observation of Brahms’s phrase marks and dynamics.

As to Barenboim’s pacing of the music, there is a breadth of utterance here you will also find in Kurt Sanderling’s revered 1971 72 Dresden cycle and in the too little known (but recently reissued) mid 1960s recordings which the Vienna Philharmonic made with Sir John Barbirolli, Barenboim’s mentor at the time. Which is not to say that these are slow performances. The First Symphony receives a reading of expeditionary purpose, with as tumultuous an account of the finale as you are likely to hear; and the more settled Second is not far behind in its moments of turmoil, abandon and release.

What is certain is that these are not performances to be measured by the clock. I think of the sense of stasis surrounding the distant, tolling subject in the Third Symphony’s slow movement which so haunted Brahms (and Elgar). It’s at moments such as this that Barenboim arrests time and, summoning the quietest of quiet playing from his orchestra, creates a true olamic silence.

This can misfire, as in the Fourth Symphony’s culminating passacaglia, where there is no real momentum before the midway point. Nor is the symphony’s mighty Scherzo in any way ‘jocose’. This is not a matter of tempo; Barbirolli is just as measured. What is different is the Meistersinger-like gait and cock-a-snook feel Barbirolli and the Vienna Philharmonic bring to the music. Yet alongside this must be set that torrential account of the First Symphony, the superb Second and a performance of the Third (the great litmus test) that you’re unlikely to hear bettered.

The ‘recollected in tranquillity’ aspect of these readings may not be for every day; nor will they readily commend themselves to all tastes in our age of sharp elbows and high-speed locomotion. (Chailly’s fine Leipzig set offers the perfect antidote.) But these are not ‘here today, gone tomorrow’ performances, as so many latter-day Brahms recordings are. They embody deeper memories and seek out larger horizons, as Brahms himself did when he created these astonishing works.