British Works for Cello and Piano 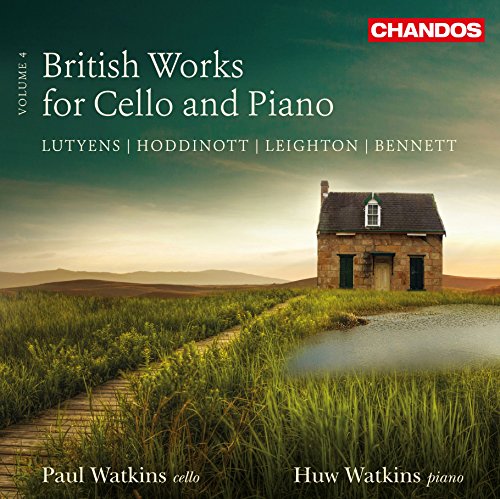 In bringing together four highly contrasting British composers of the later 20th century, this vibrant recording, with splendid playing by Paul and Huw Watkins, demonstrates the extent of the cello’s inspiration and versatility in a range of modern idioms. The instrument’s propensity for lyricism and sustained line is maintained as a feature of all the works, but there is much scope for the exploitation of the cello’s percussive capabilities as well as its extraordinary range, variety of tessituras and changing timbres.

This is evident in the earliest work featured here – Kenneth Leighton’s Partita (1959) – which begins with a singing, searingly haunting Elegy, a rhythmically dynamic Scherzo (typical of Leighton’s compelling ‘mechanistic’ moto perpetuo style) and, in a microcosm of contrasting movements, a Theme and Variations, effectively a suite of character pieces. Lutyens’s Constants (1976), more overtly expressionist in temperament, derives its title from a series of restricted harmonic and melodic intervals which feature throughout the three movements, though, even within this more challenging avant-garde dialogue between the two players, the cantabile properties of the cello ring through in the ‘Lament’ and ‘Canticle’.

Composed a year later, Alun Hoddinott’s Second Sonata begins in restive mood and is striking for its economic contrapuntal textures (often in no more than two parts), especially in the central, meditative slow movement. Richard Rodney Bennett’s Sonata of 1991, with its air of post-serial romanticism (and not without a whiff of Alban Berg), is a powerful work, full of structural invention on several architectural levels, though, of the four movements, I find the concluding miniature set of variations the most engaging for its clarity and imaginative design.

British Works for Cello and Piano