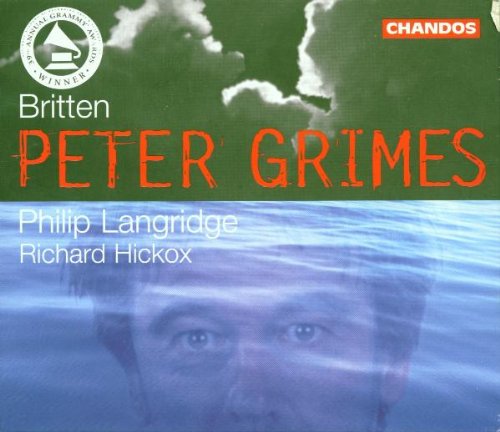 Whatever version you choose of Peter Grimes, Britten’s operatic masterpiece, you are assured of a dedicated, convincingly executed performance, different as each may be. Listening to comparison upon comparison, I found myself amazed again and again at the composer’s since-unsurpassed genius for structure, content, timing and emotional sympathy. After almost 60 years, the work re-mains the greatest opera of the mid-20th century, probably of the whole century, Elektra and Butterfly perhaps excepted.

Colin Davis’s second recording derives from performances at the Barbican in January that were enthusiastically received on all sides. As far as conductor, chorus and orchestra are concerned, it is a stunning achievement. No other set quite matches it for technical control and overwhelming firepower. As he did for Philips, Davis plays the piece for all it’s worth. There is also a refined clarity to the big and varied ensembles, which merge inevitably into the exposition of the private dramas. The crucial interludes confirm the sovereign reputation of the present LSO, at least when playing for its beloved music director.

So why am I not prepared to hail the recording as ‘Best in Show’? Well, Chandos (as part of its 25th anniversary series) has reissued at mid-price its admired performance, and Decca has brought out a box of four of Britten’s operas conducted by the composer, including the ground-breaking Grimes of 1959. That was produced by the late Erik Smith, the first opera of which he was personally in control, and it wears its 45 years very lightly.

Both the keenly recorded Hickox and the Britten sets, though studio-made, successfully attempt a simulation of a stage production, in the case of the Decca with an imagination not since surpassed. In the Barbican that isn’t technically possible; indeed, in the scene where a service is going on offstage, the Rector and the congregation sound too far away, an effect evidently attempted after the live performances. Similarly, the soloists are too distanced in relation to the chorus and orchestra. Comparisons with the Chandos and Decca sets, which give the principals immediacy, reveal how the LSO issue falls down in that respect.

Few of the principals on the new set, excellent as some of them are, stand up to their predecessors. Crucially, Glenn Winslade’s Grimes, though accurately and well sung, conveys little of the identification with the role of former interpreters. Returning to Peter Pears’s Ur-reading, I was vividly reminded of how closely the role was written to play to his strengths. Nobody else sings it so beautifully and with such astonishing control, and I had forgotten how terrifying he makes the mad scene. In a different, perhaps more modern way, Philip Langridge for Hickox – as Richard Fairman suggested in his ‘Collection’ article (6/03) – thinks himself into the very fibre of Grimes’s being. Every note, every word, carries deep meaning in a way nobody, even Pears, a little too gentlemanly in his delivery, achieves. Jon Vickers, on Davis 1, is, as ever, hors concours – rough-hewn and compelling in every way but, as with his Tristan, not to be copied.

The dissimilarities among the Ellens are not so great. On the, in some ways, unsatisfactory Haitink set, Felicity Lott is possibly the most convincing – as RF put it a ‘caring and beautifully sung’ performance – but Claire Watson for Britten – and here again I agree with RF – has been underrated. The simplicity and under-current of pent-up feelings in her Ellen are most affecting. Janice Watson, for both Hickox and Davis 2, is not far behind, though there are moments when her tone on the new set is not as pure as it might be. Heather Harper (Davis 1) is the most motherly, not inappropriate, and her word painting is singular.

I must be brief on the rest. Anthony Michaels-Moore is a bluff, honest Balstrode but not as characterful as the variously im-pressive James Pease (Britten), Alan Opie (Hickox) and Thomas Allen (Haitink), while the young Allen, on Davis 1, shares the honours as Ned Keane with Britten’s Geraint Evans. Christopher Gillett is an uninteresting Boles on the new version, not possessing the virulence of John Dobson on Davis 1 or the bitter rancour of Raymond Nilsson (Britten). Neither bass is distinguished on the new set; of former interpreters, John Connell (Hickox) is a superbly articulate Swallow, Richard Van Allan (Davis 1) the surest Hobson. The mezzo roles are well served on all sets: standing out is Jean Watson, Britten’s truly contralto Auntie, and Anne Collins’s Mrs Sedley (Hickox). Ryland Davies, on the new set, is, however, my favourite Rector.

While the strikingly powerful LSO forces on Davis 2 demand to be heard, as a whole I would prefer Hickox of modern sets, most of all for Langridge’s Grimes, Britten himself – inevitably perhaps – is still the most perceptive conductor of his own score: everything is timed to perfection, every detail is made part of the whole without exaggeration.

Britten’s conducting is also the best reason to invest in the Decca box (though the presentation is parsimonious in the extreme). In Herring, many singers of the day give formidable performances, but Pears, by 1964, is a bit of an embarrassment as Albert. All-round, Steuart Bedford’s version on Naxos is the one to have. On the other hand, Pears’s dreamy Vere is memorable in Budd, even if in many ways the Hickox version surpasses it.

With Wingrave, there is no audio competitor, but the recent DVD version (ArtHaus, 3/04), conducted by Nagano, is an experience not to be missed.