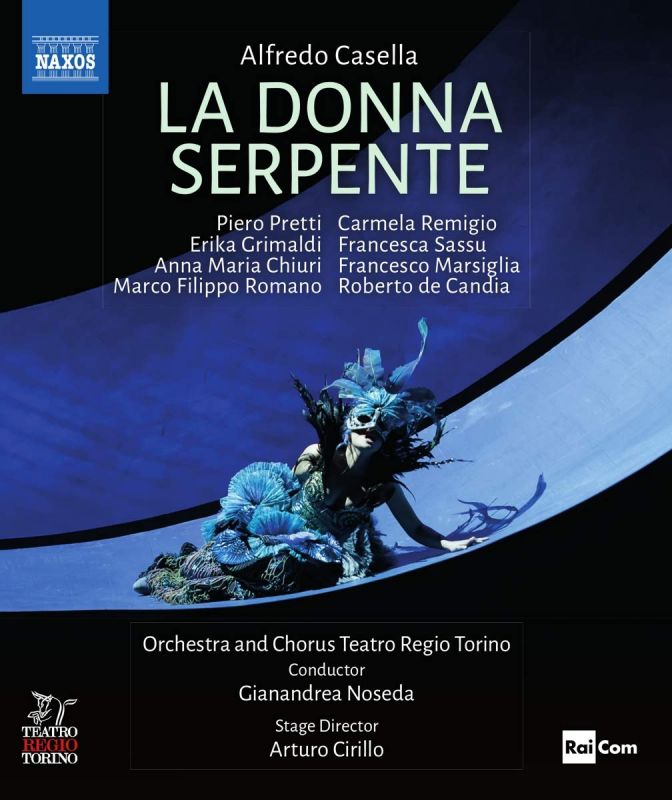 What happened to the once flourishing muse of Italian opera between Turandot (1926, a date now regarded as a watershed moment for the genre) and ‘moderns’ like Dallapiccola and Berio? While various senior veristi (Mascagni, Alfano etc) were walking into a not-too-happy sunset, biographers tell us that composers such as Alfredo Casella (1883-1947) were despising the very ground Puccini had walked on. Yet, with a rival’s jealousy or not, Casella’s 1932 Gozzi setting, The Snake Woman – incidentally a straighter takeover of that fable than Wagner made a century before in Die Feen, his first completed opera – could hardly have existed without the dramatic and musical example of Puccini’s final opera.

La donna serpente is a great and relatively unsophisticated joy to watch and to listen to, a kind of commedia dell’arte pop music in sound and vision. In parallel to the development of Russian music post-Tchaikovsky, Casella took – in this, his only opera – the route of Prokofiev (cf The Love for Three Oranges) rather than Rachmaninov’s lustrously scored post-Romanticism. The harmonic shifts are evidently of their time but there’s little to scare the tonal horses. There are swiftly moving arias and ensembles aplenty but few extended arioso solos apart from fairy queen Miranda’s moving ‘Vaghe stelle dell’Orsa’, her Manon Lescaut-like plea for clemency at the start of Act 3.

The chorus and dancers – and a large supporting cast including a quartet of Ping, Pong and Pang-like courtiers – play a huge part akin to that of the latter-day musical. Director Arturo Cirillo and choreographer Riccardo Olivier present them in conventional commedia movement style – it’s not always given with the last degree of precision but it certainly tells the story. Sets are colourful ramped blocks looking like they’re segments cut from a puzzle, all designed to be run and danced on. The show in 2016 was under the more than capable baton of Gianandrea Noseda, then music director of Turin Opera. It’s obviously well prepared and delivered. The two lead lovers – Piero Pretti as the mortal King Altidòr and Carmela Remigio as his fairy bride Miranda – have the measure of their occasionally vocally demanding parts and are well backed up by comprimarii ministers and fairy king and assistants.

The production has been efficiently and unhysterically filmed and makes for compulsive relaxing viewing. Do give it a try.