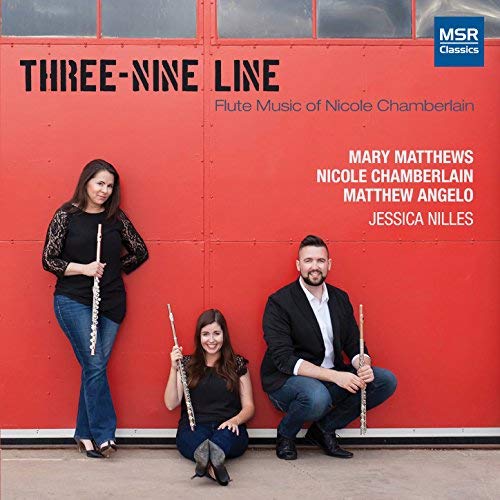 Nicole Chamberlain’s portfolio of prize-winning pieces for flute is a lovely bouquet to the flautist’s art. Considering the composer’s success with Scrub-a-Dub-Raw and Rabbit Tales for Atlanta Opera, she is already beginning to reach beyond being a flute composer; but, clearly, being a virtuoso flautist herself has informed her ability to write for the instrument with thrilling facility and endearing charm. Chamberlain and her brilliant crew might even have changed the mind of that notorious flutophobe Mozart.

On each of the 14 tracks Chamberlain crafts engaging intros which morph into often athletically demanding tour-de-force displays of what a flute, or two or three, can do when they’re just playing around – and trying to score for their players in a competition. Each piece has its own story. The four movements of Three-Nine Line, the imaginary line that runs across an airplane’s wingspan, represent different aspects of flying. The adorably cute Lilliputian is scored for piccolo and a 15 note Kikkerland ‘Create Your Own Music Box’ toy, played with consummate ease by Mary Matthews. The four movements of Smorgasbord are analogues to textures found in food: ‘Crunchy’, ‘Gelatinous’, ‘Carbonated’, ‘Fluffy’. The standout is a stand-alone piece, ‘Mintaka’ from the flute trio Orion’s Belt, commissioned by Areon Flutes, which rises above the others in the sheer intoxication with which Matthews, Chamberlain and Matthew Angelo capture the sexy energy of the flamenco.

The recordings, made in Grusin Hall at the University of Colorado, Boulder, are brilliant and clear, and the booklet notes supply all the engrossing details.