CHESNOKOV Teach Me Thy Statutes 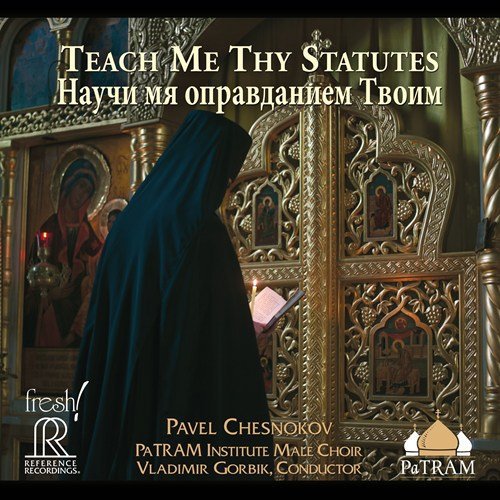 In 1920 Pavel Chesnokov was appointed Professor at the Moscow Conservatory, teaching choral techniques. He published a major treatise on the art of choral conducting, upon which his international reputation has largely rested since its translation into English and publication in the West. Yet for two decades leading up to the Revolution, he was one of the most significant composers for the Russian Orthodox Church. He died while standing in a bread queue in Moscow during 1944, apparently succumbing to malnutrition. While some of his music has found its way on to various commercial recordings, here we have the first really significant recorded collection of his music for the Orthodox liturgy.

A joint Russian-American choir, drawn from three different ensembles, was assembled for this recording under the auspices of the North American-based PaTRAM Institute. It comprises 21 tenors, nine baritones, seven basses and five profundos, and is very much a tenor-dominated sound with little obvious resonance from the lowest voices.

This gives it all a fervent feel which certainly suits the spiritual intensity of Chesnokov’s writing. Coupled with Vladimir Gorbik’s well-paced direction capturing the essential speech rhythms of the texts, the liturgical and prayerful nature of the music is very apparent. If we miss the profound bass presence we have come to expect from Russian church music, we nevertheless have vivid dynamics, a tremendously full-throated tone and some exquisite placing of thick-textured chords.

At over nine minutes, the longest single item on the disc is ‘The Great Doxology’ from the All-Night Vigil of 1912. Gorbik describes this as ‘a true masterpiece of 20th-century Russian sacred music’, and this is a sweeping and, at times, expansive performance. Mostly written in six parts and firmly rooted in G major, we experience Chesnokov’s conservative style, primarily chordal with small outbursts of polyphony, and unexpected moments of harmonic richness. It reveals both Chesnokov and this large male choir at their very finest.

CHESNOKOV Teach Me Thy Statutes

Teach Me Thy Statutes