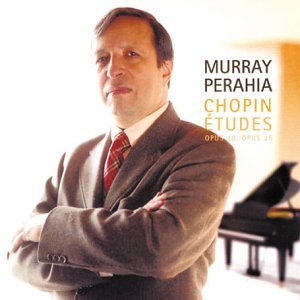 Once faced with injury and the possible end of his career, Murray Perahia has made a glorious recovery. Here he returns to his beloved Chopin after his recent and superlative Bach recordings, doubly conscious of one composer's tribute to another.

From Perahia there is order and lucidity at the heart of even Chopin's most audacious fire-storms and in, for example, Etudes Nos 1 and 4 from Op 10, you are made more aware than ever of an incomparable mix of poetry and precision. Perahia's may be a wholly modern voice yet he truly speaks in the spirit of his revered masters of the past, of Cortot and Fischer in particular, and this, allied with his immaculate infinitely polished and shaded pianism, gives his performances the rarest distinction and quality.

How superb and unfaltering is his mastery in No 1, that magnificent curtain-raiser to Op 10, how magical his improvisatory touch in its closing page. His textural translucency and musical breathing, his rubato in No 3, like that of Rubinstein, is that of a great and natural singer of the keyboard. Chopin would surely have cried out once again, 'ah, mon patrie!' if he had heard this performance.

No 8 is delightfully rumbustious and just when you note a touch of evasion in his rapid spin through the morbid near-Wagnerian chromaticism of No 6 you find yourself relishing his cool tempo, a musical ease and flexibility that give new meaning to Chopin's prescribed con molto espressione. On the other hand No 7 from Op 25 unfolds with the truest, most memorable sense of its lento elegy. Perahia realises the mountain echoes and final desolate peal of bells in No 9 from Op 10 - its pulsing agitation deeply underlined - and where else have you heard a more impassioned or articulate Revolutionary Etude?

Perahia can ease or emphasise the tension of the towering Op 25 No 11 Etude seemingly at will, and his exploration of the play of melody and counter-melody in No 1 from the same opus is achieved with a naturalness that can make other performances sound disfiguring and self-conscious.

Faced with artistry of this calibre, criticism falls silent; one can only listen and wonder at such unalloyed perfection. Personally, I would never want to be without Cortot's inimitable recording of the Etudes (his muddles and caprice as much a part of his artistry as what Daniel Barenboim so perceptively called 'the opium' of his playing) yet Perahia's is the finest of all modern discs of the Etudes. Sony's sound captures all of his artistry; hopefully, recordings of the Trois Nouvelles Etudes, the Waltzes, Scherzos, Mazurkas et al are a not too distant prospect.