Fialkowska produces one of the outstanding highlights of Chopin Year 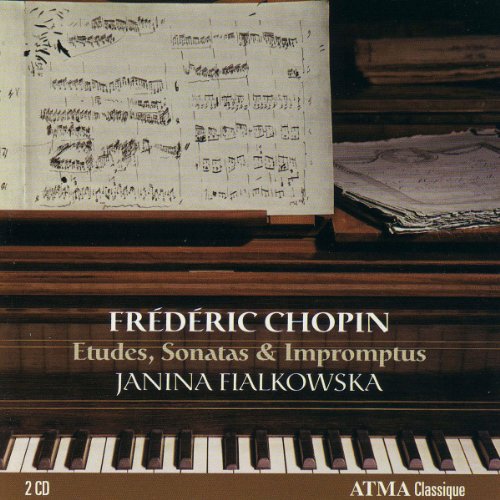 My qualified admiration for Fialkowska’s recent ATMA Classique Chopin disc (6/10) is magisterially cancelled by this latest two-disc album. Here, my reservations are blown apart. Indeed, lesser mortals may well weep with envy at such unfaltering authority and I hesitate even to imagine the hours of work behind such magnificence. What a glittering and assured curtain-raiser to the Op 10 Etudes; and if she can command with the best of them she can just as easily take you into her confidence. No 3 is, for once, truly Lento though with a marked sense of character in the central Poco più animato, while in No 6 Fialkowska is hauntingly responsive to Chopin’s nameless malaise. How perfectly she judges the echoing mountain-calls in No 9, while even the most seasoned pianist might despair over her fleetness in the Op 25 Etude “in thirds”.

Elsewhere she is grand and imperious in the Second Sonata, storming the first movement’s climax in towering and heroic fashion, and her demonic pace and drive make a true Mephisto-scherzo of the second movement. Her finale, while hardly sotto voce, opts for a more ferocious but intriguingly voiced alternative and she has all of the four Impromptus’ lighter charm and caprice at her fingertips. Her B minor Sonata is as thoughtful as it is masterly and if I occasionally missed the seductive tonal allure and magical cantabile of a Cortot or Perahia (most notably in the Largo), I was filled with admiration for such clarity, strength of purpose and musical integrity. “Chi-chi phrasing and powdered rubato” (in Dame Moura Lympany’s immortal words) are not for her, nor does she eat fire for breakfast (à la Argerich). Instead she offers an unfailing balance of sense and sensibility. Well recorded, she has done her one time mentor, Arthur Rubinstein, proud.