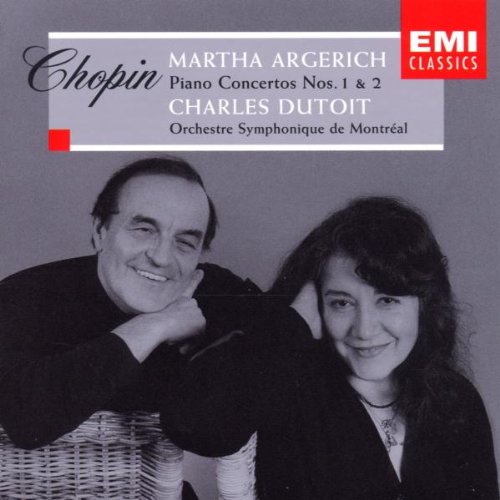 Martha Argerich’s first commercially released recordings of the Chopin concertos were for DG; No. 1 with the London Symphony Orchestra under Abbado in 1968, No. 2 with the National Symphony Orchestra under Rostropovich in 1978. Today, she revisits both concertos with the Montreal Symphony Orchestra under Charles Dutoit and offers an act of recreative daring, of an alternating reverie and passion that flashes fire with a thousand different lights. Indeed, her earlier performances (see mingly non pareil at the time) are infinitely less witty, personal and eruptive, less inclined to explore, albeit with the most spontaneous caprice and insouciance, so many new facets, angles and possibilities. Now, everything is accomplished without a care for studios and microphones and with a degree of involvement that suggests an increase rather than a diminution of her love for these works.
Her first entry in the E minor Concerto is intensely dramatic and fortissimo, her second subject coloured on each appearance by the most audacious rubato. Listen to her at 7'40'', countering Chopin’s legatissimo right-hand octaves with an underlying left-hand tension that is at once personally yet authentically stretto. She commences the finale in playfully emphatic style before spinning off page after page of her most spine-tingling bravura, her darting crescendos and descrescendos within the phrase and bar like sudden spurts of flame. How classic, too (if the term be allowed for performances that pulse with such engagement), is that sudden snatching at a phrase at 2'59'' in the Second Concerto, before a no less characteristic calming and luxuriant compensation. The final mazurka is the epitome of grace (semplice ma graziosamente as well as Allegro vivace) and the coda, launched with an impish acceleration by Dutoit (did he hope to catch her napping?), is of an inflammatory brio that will make lesser mortals weep with envy. The recordings, when you stop to notice them, are impressively natural (very much as you would hear these concertos in the concert hall) and if Dutoit occasionally seems awed if not cowed into anonymity by his soloist (the opening tuttis to the slow movements of both concertos are less memorable than they should be) he sets off Argerich’s charisma to an exceptional degree.
Finally, those inclined to wonder at Martha Argerich’s welfare, particularly after her recent illness, can rest assured. Her light burns brighter than ever. Rarely in their entire history have the Chopin concertos received performances of a more teasing allure, brilliance and idiosyncrasy.'